Technology is playing fundamental role in shaping the lives of individuals across the globe. Keeping in view the significance of technology and the changes it can bring, Telenor Group has recently conducted an online survey across six nations in Asia while their assessing millennials’ attitudes about future career, technology’s impact and skills they need to be best prepared for the future jobs.

The final results indicated that the youth of Asia shows great enthusiasm for digital jobs whereas 100% candidates predicted robots as the as the workplaces.

Let’s go through this entire survey quickly and know about the scope of technology in coming years in youth of Asia life and careers.

1. Digital Technology as the key to Future Careers

2. Robots to Replace Humans at Workplaces

All the respondents i.e. 100% agreed to the idea that robots will take over the humans in coming years. Industries will see another phase of industrial revolution by replacing man with machines. 41% of surveyed in Myanmar, 38% in Singapore and 34% in both India and Pakistan agreed to this idea.

3. Asia’s Youth Potential to Add up to the Industry

What Asia’s Youth think they can Add up to the Industry? Two types of views were found while answering this question. The youth in Singapore (32%), Malaysia (24%), Bangladesh (26%) and Pakistan (21%) chose to describe themselves as enthusiastic and desirous in order to contribute their efforts in future businesses. Whereas in Myanmar (30%) and India (24%) youth considered themselves as highly creative and intuitive thinkers. 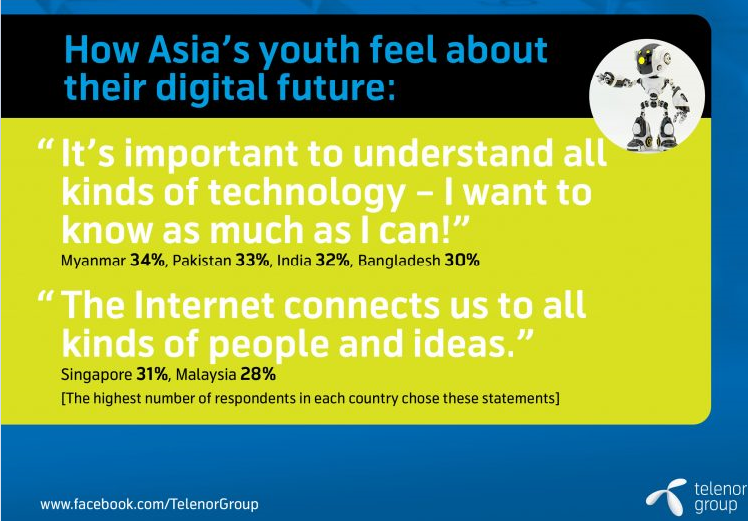 After the completion of this survey, Mr. Yasu Sato, the Head of Digital Capabilities, People Development, Telenor Group concluded this survey and said that:

“It’s fascinating to see that young adults not only revere technology and the opportunities it presents them, but also see themselves as ‘compassionate’, and ‘highly creative’. The fact they are aligned in not only believing that technology and the internet are crucial for their careers, but that they are excited about this, is very motivating to us. They reflect the way Telenor Group views Asia—as a vibrant region with talented and promising youth who look to make meaningful contributions in their jobs of the future.”