Pakistan Science Foundation is a major contributor in promoting and encouraging the importance of science and technology. They not only organize a Science expo every year but also give scholarships to students perusing science. Expo is being held to stimulate collaboration between government, business, and academia. It is to provide a forum for organizations to demonstrate their achievements in the fields of science, technology, and innovation, according to PSF’s Chief Scientific Officer, Syeda Rehana Batool.

She told APP that it will take place on the 28th and 29th of January at the Pakistan China Friendship Centre, which will give a networking platform at the highest levels of government and business.

Also Read: The Week in Games: 14 PC Games to arrive this week of January 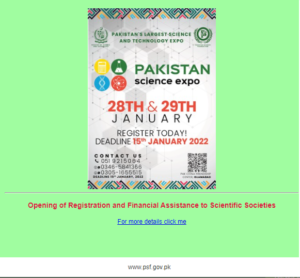 The expo will feature 120 stalls and would be attended by regional and global diplomats, lawmakers and political figures, private company executives and CEOs, content creators and celebrities, industry experts, students from schools, colleges and universities, entrepreneurs, and incubation centers, intellectuals, researchers, and scientists.

The Pakistan Science Expo is the state’s first of its type, intending to showcase the accomplishments of Pakistani scientists, technologists, science groups, students, institutions, and researchers. This expo will serve as an excellent networking opportunity for both businesses and platforms.

It is an Open Event

On a first-come, first-served basis, stalls will be assigned. The layout plan is accessible in booklets that may be downloaded from the PSF website: http://www.psf.gov.pk/. The application forms are also available for free download.

In response to a query, Rehana Batool stated that selling any goods during the expo is not prohibited, but it must circle and represent the event’s topic, which is science and technology.

The entry is free and open to the public. She urged students from government and private institutions, colleges, and universities to join, either by renting stalls or as the general public.