A couple of texts can crash the WhatsApp, the messaging app, but not only the app also the entire Android device.

The text messages sent to WhatsApp have hidden symbols between spaces. When a user taps on message, the hidden symbols expand, that causes the app or the phone to go down.

A Couple of Texts Can Crash the WhatsApp & your Android Phones

The message is in a simple text in quoted form, it looks like “This is very interesting,” with the “laughing so much I’m crying” emoji. The symbols are hidden between the quotation mark and the emoji. 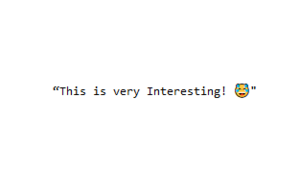 However the second message communicate accurately that what will happen when you tap on a black dot, which is a part of the message. If a user touch the black dot then their WhatsApp will hang. No doubt most people will tap on it, which includes a finger pointing to the dot. When a user tap on the black dot, it will convert the text to html that means some kind of data stealing is happening in the background. Be aware of it.

We don’t know how much time will WhatsApp take to resolve this issue. What you have to do till that? Simply avoid these type of text messages or use another messaging app.

Read Next: WhatsApp Co-Founder Jan Koum to Depart from Facebook