Maps are one of the oldest things known to mankind. Before the era of technology, people draw paths and areas. They give them labels and estimate the distance between one place to another. This turns out to become a full-fledge map. But, now as technology is ruling the world, maps also change their forms. Navigation and traveling were never that easy as it is now. Google Maps is by far the ideal navigation tool for Android Auto users. But, there are a number of alternatives available, including Waze.

Shifting to one of these options appears to be the only choice for some unfortunate Android Auto subscribers. They encounter an unusual glitch after downloading the app’s latest recent update. According to several entries on Google’s customer forums, the upgrade to Android Auto 7.2 prompt Google Maps to vanish in the car, making it difficult to utilize the mapping system. If it is the primary app installed. It’s unclear who is more affected and who isn’t. But, the update appears to have rendered Google Maps unavailable solely on Android Auto at first look.

The application is still on the smartphone, and it may be used normally even when your mobile has no link to your car’s head unit. 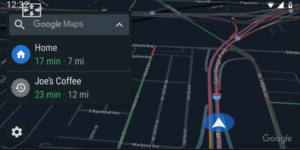 Recently a user who is experiencing this issue claims to have already contacted Samsung for help in dealing with the situation. Instead of criticizing the update and advising the consumer to contact Google, the Korean Giant is emphasizing that it is not an issue on their end.

The only solution for anyone experiencing this issue appears to be a brief switch to another app, like Waze. Of course, if users really must have Google Maps, the only option is to skip starting Android Auto. And instead run the software on their smartphones with the navigation appearing on the screen.