Oppo keeps on introducing new handsets in order to remain in the limelight. Recently, a New OPPO phone surfaced on Bluetooth SIG’s Database hinting that a new smartphone is on its way to the market. It means that the company is prepping to launch a new handset very soon.

According to the reports, the upcoming handset bears a model number of CPH1931. Together with that, we also got to know about some of its specs from the listings. The handset is tipped to feature a big display of 6.5 inches that carries support for HD+ resolution. Rumors claim that it can be an LCD panel. However, there had been no words regarding the notch of the smartphone yet.

The best part about the handset is that it will be the first OPPO smartphone to arrive with a behemoth battery of 5,000mAh capacity. The handset will run the latest ColorOS 6.1 based Android 9 Pie OS straight out of the box. Moreover, it will be powered by Snapdragon SM6125 chipset. The SM6125 is actually the codename of the 11nm Snapdragon 665 chipset that was announced back in April. It includes a 2.0 GHz octa-core processor and Adreno 610 graphics. 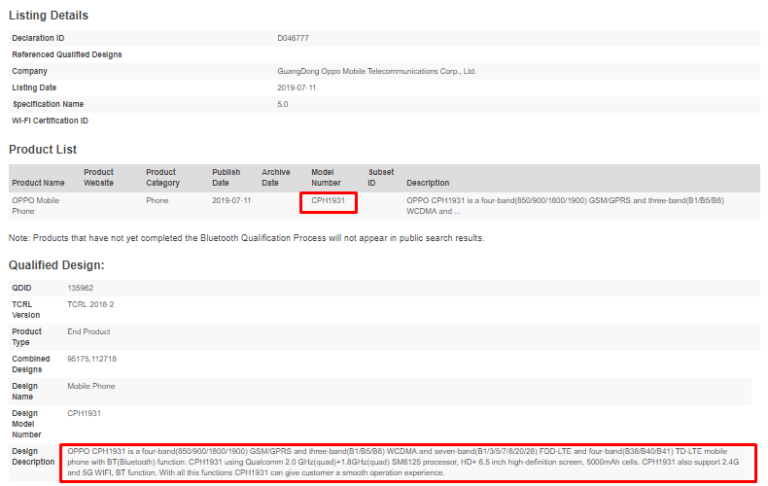 It seems to be a mid-ranger by OPPO. There had been no further info regarding the handset yet. Let’s see what comes next. Til then stay tuned for more updates.