We all know that Twitch and Youtube App already contain a gaming tab that allows the users to find games to play or watch streaming. In a challenge to Twitch and Youtube, the social media giant, Facebook has also added a new gaming tab in the navigation bar of the App. A dedicated Gaming tab is rolling out to the Facebook App Users right now.

The social media giant, Facebook is not coming slow. It is all set to challenge the Twitch and Youtube. In order to engage the gamers, the company is now rolling out the gaming tab to its Facebook app. The new gaming tab will help users to find games, streamers and gaming groups they follow more easily. In addition to that, they can also discover new content, based on their interests. Facebook has taken this step in order to give a tough competition as the Twitch and Youtube are trying to dominate the gaming space.

“After clicking the new Gaming tab, there will be a feed of content that points to instant games you can play with friends; videos to watch from top streamers, esports organizations, and game publishers; and updates from your various gaming groups.” 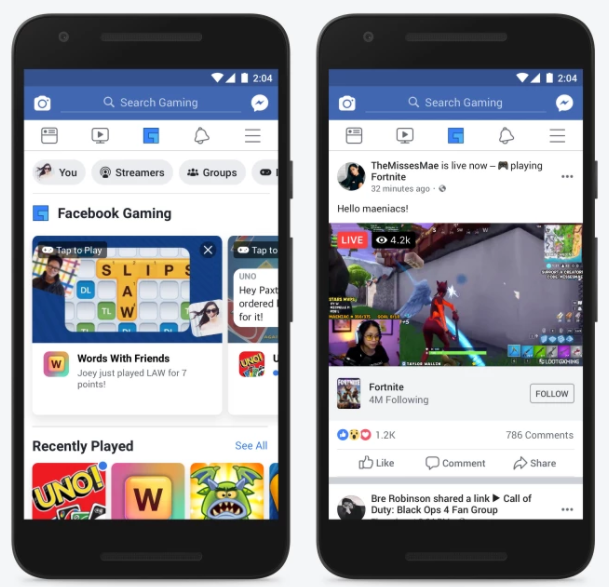 In addition to that, according to the previous reports, Facebook is also working to integrate its three messaging platforms, Messenger, WhatsApp, and Instagram. However, these apps will not merge completely and will continue working as standalone apps. The fact is that the social media giant, Facebook wants to allow users to use any of these platforms without navigating the app. So, it is expected that Facebook will integrate these apps in such a way that if a user is using any of these three apps, he/she can use the remaining two apps without leaving the previous one.