The Need for Speed sequence has a long history, and it has seen some incredible highs and lows. The golden era for the games, in our opinion, was when EA put Criterion on it. It was then best known for the Burnout series and delivered several noteworthy entries, including Need for Speed: Hot Pursuit. It is a top-notch action racer and possibly the best in the series.

Need for Speed is a Classic

Regardless of how amazing the games were, Need for Speed has permanently moved units, even if it appeared like they were just spinning their wheels in recent years. The previous installment, 2019’s Need for Speed Heat, was decent but nothing exceptional, and in a world where Playground has now raced through five Forza Horizons, it just didn’t have the same level of excitement.

Publisher EA believes something needs to change as well since the series has been shifted from former developer Ghost Games to two of its operating companies that can only be described as a dream team for racing fans: Codemasters and Criterion. 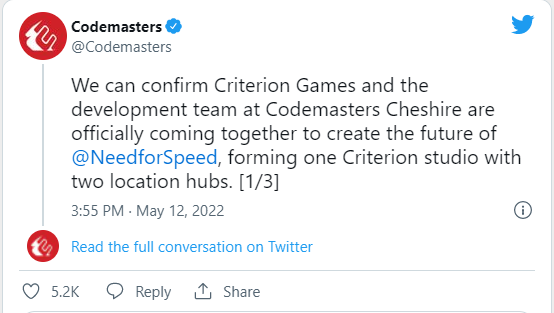 “We can confirm that Criterion Games and Codemasters Cheshire’s development team are officially joining forces to produce the future of Need for Speed.” Adding to the statement, they further said. “One Criterion studio with two location hubs,” according to Codies Cheshire. This integration builds on the strong collaboration between the two studios in recent months.

Criterion needs no introduction to action racing enthusiasts, with Burnout Paradise still the best genre example ever created. It has produced several excellent racing games over the years. However, it has recently appeared to be more of a support company for other major EA projects such as Star Wars Battlefront 2 and a couple of Battlefield games.

Racing Development Team is Putting Quite an Effort

Codemasters Cheshire was formed from the ashes of Evolution Studios. He is a specialty racing developer best known for the Motorstorm series. It was put together by Codemasters after Sony abruptly dissolved Evolution in 2016. EA purchased it last year as part of the $1.2 billion Codemasters transaction.

In a broader sense, Codemasters has evolved into a specialist racing studio. It includes both the Grid and F1 series constantly producing good games.

So, the next Need for Speed may be a winner. You couldn’t put two more exciting development firms together to make an action racing game. And Need for Speed is all about letting go and enjoying the thrill of the road. We could be in for something unique if this game lives up to its skill, with gorgeous and ridiculously fast cars doing absurd things to an excellent licensed soundtrack.