From last few months, WhatsApp is adding new features to its platform for its users. Just yesterday, WhatsApp introduced a news feature named, Label Forwarded Messages which will help in curbing misconception. The new label will indicate when a message has been forwarded to someone from another user. This label will apply to text, images and audio messages. The Facebook-owned company is planning to add to its feature list, by developing a WhatsApp Mark as Read Feature for notifications. The new Mark as Read feature is spotted by WABEtaInfo.

WhatsApp is rolling out a new beta update for Android. It is coming with the most awaited feature, the company is working on. With the new update, WhatsApp will get a new mark as read shortcut in notification centre.

Currently, when you received a message on Whatsapp, you see “reply” shortcut currently. WhatsApp is working on creating a new shortcut to be included in the notification centre. 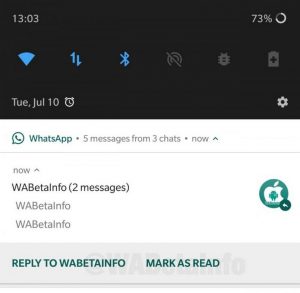 Soon, when you will receive some message from your friend, you will see the ‘Mark as Read’ shortcut and, as the name suggests, it allows to quickly mark the message as read directly from your notification centre. This new button will be accompanied with ‘reply’ button.

WhatsApp Beta Version is also bringing a mute button in the Notification Center. With WhatsApp Mute button, one can easily mute chat from notification centre directly.

Also Read: How to Run Double WhatsApp on Android Phone?