AirLink CEO and Chairman of Mobile Phones Importers & Manufacturers Association, wrote a letter to the federal Finance Minister ‘Miftah Ismail’ to address the ongoing issues being faced by mobile device manufacturing companies and also came up with the Proposed Solutions.

In his letter to the Miftah, he wrote that;

“Mobile Phone Importers & Manufacturers Association (MPIMA) is a representative body of around 80% of the key players from the Mobile Phone Importers & Manufacturers of the Country. MPIMA and its members have a significant role in the development of Mobile Phone and Allied Product Sector of Pakistan which includes preparation and implementation of Device Identification, Registration and Blocking System’s (DIRBS) and formulation of Pakistan’s first Mobile Device Manufacturing Policy.

All major players of the industry including but not limited to Xiaomi, Infinix, Oppo, Vivo, Techno, iTel, Alcatel, Maxfone, VGOTel & QMobile have deposed their confidence on MPIMA as their representative forum before relevant authorities on the matters affecting the interests of the industry.

Government of Pakistan has recently made amendments in its Import Policy to curb the pressure on the FOREX reserves of the Country. These amendments in its present form having a detrimental effect on Mobile Device Manufacturing Industry which is still in its infancy. The key stakeholders in Pakistan’s Mobile Phones Industry’s ecosystem. We fully acknowledge the current fiscal problems being faced by the country and fully support the efforts by the Government of Pakistan to maintain the FOREX reserves. That’s why we have suggested that subject to the provision of proposed conditions, the members of MPIMA are committed to export and earn around as per the following schedule:

The consensus of opinion among the members of the Mobile Phones Importers & Exporters Association is summarized in brief on issues being faced by mobile device manufacturing companies and their proposed solutions is stated as under: 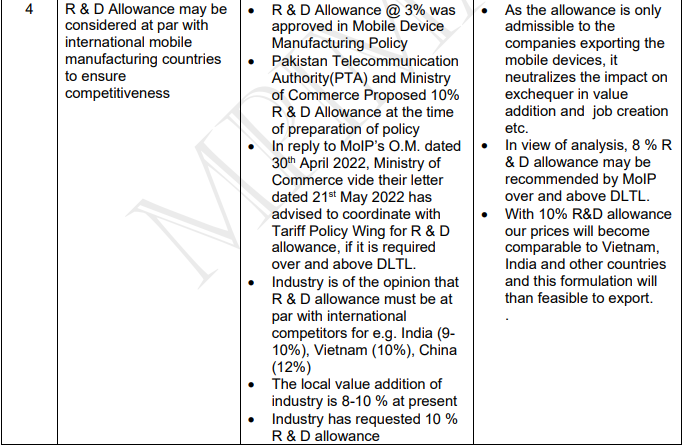 It is pertinent to mention here that a self-claimed unregistered Association i.e. Pakistan Mobile Phone Manufacturers Association (PMPMA) has presented few suggestions on the aforesaid issues. PMPMA only represents less than 20% of the manufacturers of the Country who are mainly producing entry level 2G/3G mobile phones which are of value less than 100 USD, hence, has zero potential of export. Our all members being major stakeholders of the industry have strongly rejected and disassociated themselves from the suggestions of PMPMA made aforesaid letter”.