October is fully packed with smartphone releases and teasers of the upcoming ones. A few days back, a render was posted on Weibo by a tipster using the twitter handle of Ice universe. Ice universe is quite famous for posting reliable information about upcoming smartphones. This render ostensibly revealed the Oppo R19. Oppo R19 render shows an in-display front camera.

According to this render posted on Weibo, the smartphone will feature razor-thin bezels. The render clearly shows an in-display front-facing camera instead of the notch. It is expected that the phone will sport a small round sensor on the screen instead of a large notch. The smartphone will also feature an in display fingerprint reader according to this render. Furthermore, the back of the phone resembles Oppo R17. The back of the smartphone has a gradient color design. Moreover, there is a vertically mounted dual camera set up in the top center of the rear. Let’s have a look at the render. 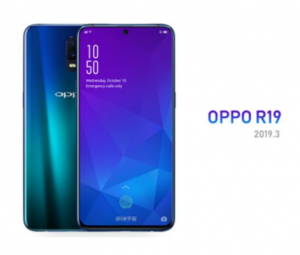 However, there is still a question about the legitimacy of this render. According to some previous cases, we all know that OnePlus often borrows the design of Oppo phones for its handsets as Oppo and OnePlus have the same corporate parent. For example, OnePlus6T is quite similar in design to Oppo R17 and R17 Pro. So, it is possible that this render could be the first look of the OnePlus 7. However, if the render is legit then according to it, the Oppo R19 launch date is expected in March 2019.
We are not sure about anything right now as there are no words by the company. Moreover, it will be too early to confirm things right now. Let’s see whether this comes out to be the first look of OnePlus 7 or Oppo R19.