Amazon unveiled a new device, Echo Show. Its is a touch screen device that allows user to make video calls and watch clips of CNN. There are rumors that Echo Show will go on sale by June for $230. Amazon Launches Touch Screen Device ‘Echo Show’ with Video Calling Feature. 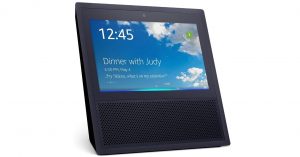 The launch of Echo Show proves that this time Amazon has tried to make Alexa a basic part for its customers. This feature is absent in same devices offered by competitors such as Google.
Last month Amazon launched a voice-controlled camera with an app that recommends clothes for users. Microsoft also plans to develop a voice activated Speaker in partnership with Samsung.