First, let’s look at the significant similarities. AMD’s RDNA 2 architecture is the company’s greatest to date, and it’s already made its way into an amazing lineup of graphics cards, including the Radeon RX 6900 XT and the latest consoles from Microsoft and Sony. It is also the architecture that powers the RX 6600 XT and RX 6600.

This results in peak single precision performance of 8.93 TFLOPs, compared to the 6600 XT’s 10.6 TFLOPs.

Both graphics cards include 8GB of GDDR6 memory, however the 6600 is significantly slower since it is rated at 14Gbps rather than 16Gbps on the 6600 XT, with a memory bandwidth of 224GB/s rather than 256GB/s. Both contain a 32MB high-speed Infinity Cache. 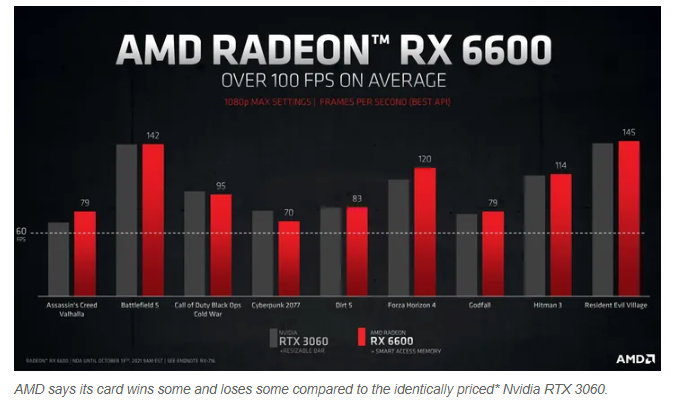 However, one thing is list pricing and the expected market role of a specific GPU, and another is the present (excessively inflated) GPU market. As a result, the Radeon 6600 XT ended up being a good option due to its availability, also among the greatest we’ve seen for a new graphics card in the previous year or so.

AMD claims a 10 to 15% performance difference between the 6600 and 6600 XT, but the firm would prefer you look at its 23% performance boost over Nvidia’s RTX 2060 providing you’re using Smart Access Memory aka Resizable BAR with a compatible CPU and game, of course.

AMD’s Radeon RX 6600 has already been launched, and the graphics card has been found benchmarked in 3DMark, providing us with another look at the possible gaming performance on offer.

We also performed 3DMark’s Time Spy Extreme, which is an excellent way to see how well a card performs in DirectX 12 games at 4K resolution.

This leaked benchmark, shows the vanilla RX 6600 achieving a graphics score of 8,155 in the Time Spy test (with an overall result of 8,612).

Beginning with F1 2020, we discover results that are best described as expected, with the new RX 6600 coming in 13% slower than the XT variant, with an average frame rate of 141 fps. Moving on to Cyberpunk 2077, the RX 6600 struggles even at 1080p, averaging 60 frames per second. Death Stranding is more 6600-friendly, with an average frame rate of 135 fps at 1080p while utilising the highest in-game quality option.

The Radeon RX 6600 is now available from AMD board partners like as ASUS, Gigabyte, and XFX, with prices beginning at $329. AMD CEO Lisa Su recently stated that she expects the present global chip scarcity to last through the second half of 2022, thus we believe that availability of the RX 6600 will be limited.

The assumption is that there will be even more vanilla Radeon RX 6600s available at launch, so you will not only have a greater opportunity of purchasing one, but you will also hopefully be able to do so at a fair price. That’s encouraging, though it remains to be seen, and we’ll keep this in mind when we test the RX 6600.

Bottom line, the Radeon RX 6600, like the 6600 XT, is an uninspiring device made acceptable only by the present market conditions. It feels wrong to suggest any graphics card right now, especially one that would not be excellent value, or even close to it, in a regular market.