Most of the smartphone companies are making plans for the rollout of the latest Android 9 Pie Update. HTC is yet another maker to detail its plans for Android 9.0 Pie updates. Yesterday, the company has announced that the Android 9 pie update for HTC phones will roll out soon. The company confirmed the names of four phones which are getting the delicious Pie update.

HTC has confirmed on Twitter that their four phones are going to get the latest Pie update. The company further said that they can’t wait to know the user’s reactions when they will get the Google’s freshest slice of Android. The timeline for rollout will be announced soon according to HTC. 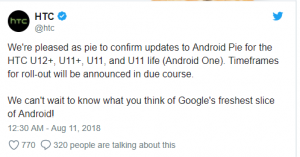 The names of four HTC phones getting the latest update first are written as follows: 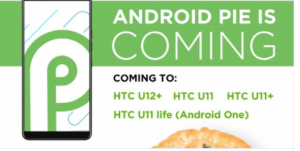 As you can see, this year’s smartphone HTC U12+ is the first on the list along with the U11+, U11 and U11 Life(Android One). The HTC U Ultra and HTC U play are nowhere to be seen. However, there’s still a chance that these smartphones will be included in a subsequent wave of updates.

The company has not given any specific timeline for the updates. According to the tweet, HTC will be publishing the roll-out schedule soon enough. So, the users who own any of these mentioned smartphones should keep calm and wait for its rollout. We can hope to know about the schedule of roll out soon.