Samsung finally extended its Galaxy J series by launching the budget-friendly Galaxy J4+ & J6+ back in October 2018. Recently, we have come to know that South Korean tech giant, Samsung is seeding the latest Android 9 Pie Update to Galaxy J4+ & J6+.

According to the recent reports, the update weighs more than 1GB in size. Furthermore, it carries a security patch that’s dated April 1, 2019. The update will also come with One UI which is the latest iteration of Samsung’s custom Android skin. The update will make its way to all the users in phases.

The Galaxy J4+ is receiving the latest update in Ukraine, Thailand, and Vietnam, whereas the Galaxy J6+ is getting it in India, Iraq, and Germany. If you own any of these handsets, do share with us in the comment section that whether your handset has received the latest update or not. 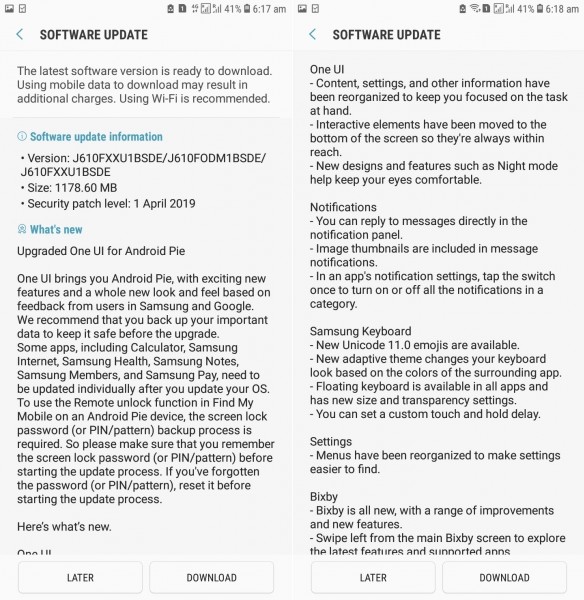 It is very difficult to differentiate between both smartphones because both of these handsets are very much the same when it comes to their size and some of their hardware. So, at first look, people are not able to differentiate between the Galaxy J4+ and J6+. Furthermore, both handsets feature a similar 6-inch HD+ Infinity display (1,480x 720 pixels). The duo is powered by a quad-core Snapdragon 425 processor clocked at 1.4GHz. A 3,300mAh battery cell keeps its lights on.
However, there are a few specs that separate them apart. The Galaxy J6+ features 4GB of RAM and 64GB of internal storage while the Galaxy J4+ comes paired with 2GB of RAM and 32GB of onboard storage. The J6+ features face recognition and a side mounted fingerprint scanner with a glossy finish design. However, there’s no fingerprint scanner found on the Galaxy J4+.