Google has long been working on making the experience of owning an Android phone more seamless. The company always tries to make things more convenient in order to engage its users. Recently, we have come to know that Android Messages Spam Protection Feature is rolling out to some users. This feature will require much less effort from the users to tackle spam messages.

We all know that the news spam protection feature was initially discovered in version 3.4 of Android message. Moreover, it came along with the Dark theme mode at that time. Before this new feature, it was only possible to manually report and block the spammers after receiving the message. There was no such option that can automatically do it for you. However, the all-new Spam feature requires much less effort from the users now. When this feature is enabled, the information about the received message is sent to Google. The good news is that personal information such as phone number and content of their message is stripped off and not included in the information sent to Google. After that, Google uses this to detect spam messages. If detected, it subsequently blocks them. According to the latest reports, Google will use Data analytics and machine learning algorithms to determine common features between the spam messages. In order to activate this feature, follow the steps written below: 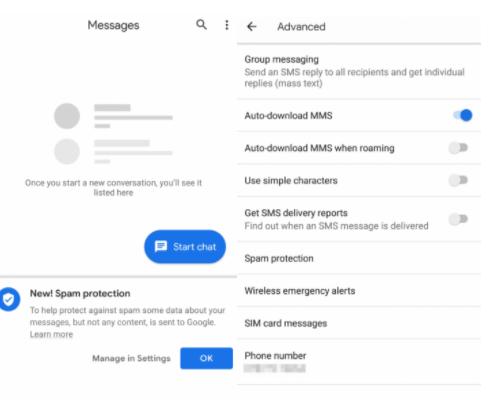 In addition to that, Google also made it possible to send the SMS using desktop just like WhatsApp web. Its working is also quite similar to WhatsApp Web. All you have to do is to pair your computer to your phone which allows you to send and receive SMS from either device.