Google already revealed the name and features of its Latest Android Update but it never gives out an exact date of its Launch. Now, a new leak may have uncovered when Android 7.0 Nougat will be available to Nexus users. Android Nougat To Be Released On August 22 For Nexus Devices.

Android Nougat To Be Released On August 22 For Nexus Devices

Canadian carrier Telus has posted an update schedule in its forum that puts the Android 7.0 release date on Monday, August 22 for the Nexus 5X and Nexus 6P. 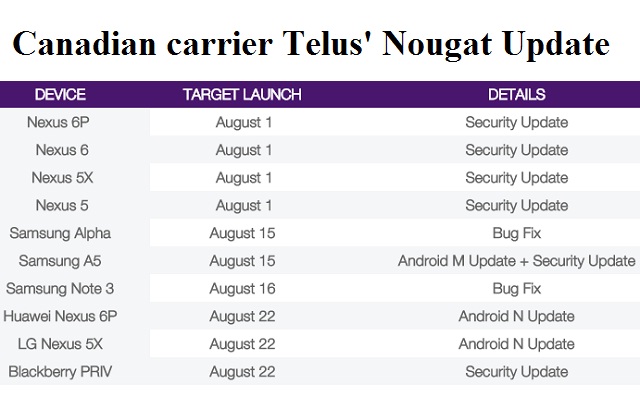 There are two handy new features in multi-tasking on Android N. First up is a Clear All button at the top of the multi-tasking menu. Secondly, Google’s added Quick Switch to Android N. This lets you jump back to the previous application with a double tap of the recent (multi-tasking) button in the navigation bar.

Not only Canadian carrier Telus, LG has also confirmed Nougat released. LG has also announced to launch LG V20 smartphone in September this year. According to LG, V20 will likely be released before any Nexus phones.It means LG V20 will surely be the first smartphone with latest Android OS Nougat.