Huawei’s EMUI 9.0 was announced a few months ago.  The update brings a simplified UI, new gesture navigation, and HiVision ‘AI’ features. We have come to know that the update is rolling out to Huawei Phones right now.

Here Is The List Of Huawei Phones Getting EMUI 9 Update

Before this update, only Huawei Mate 20 was the device with EMUI 9 so far. However, all the other devices were able to run a beta with Android Pie. The Huawei Smartphones who will be getting the latest update are written as follows: 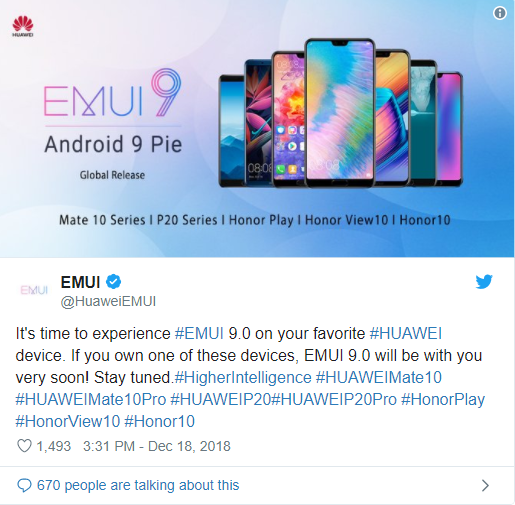 According to the company, the Huawei EMUI 9 Beta Update will provide a simple, enjoyable, and consistent user experience. Furthermore, the update will also include GPU Turbo 2.0, Password vault and optimized app launch. In addition to that, this Android Pie 9 based EMUI 9 update will also bring the features already announced on the arrival of Android Pie. They include the features like Adaptive Battery, Adaptive Brightness, Digital Wellbeing or Huawei’s Android Dashboard, and AI suggestions in the app menu.

The update is quite hefty. It takes about 4GB. However,  you can move over to stable EMUI 9 with a smaller 770MB update if you were already on the Android Pie beta. You can request for an update when it will pop out on checking your updates. If you own one of the above-mentioned devices, then wait for a couple of days as the latest update will roll out in phases gradually.