Angry Birds is no longer just a game, it’s now a full blown brand. As we already informed that Angry Birds and Star Wars have teamed up for a game, the aptly named Angry Birds Star Wars.

This new blocked buster has been launched. The game play is a mash up of the first Angry Birds game and Angry Birds Space, with added light sabras and laser blasters thrown in. Naturally the old Angry Bird characters have been given a Star Wars make over and the background settings for each level are drawn from the Star Wars universe.

[blockquote cite=”Ibtimes”] The gameplay remains same. You have to throw the birds from a sling and kill pigs. Nice and easy. But there are subtle changes in the way the environment as well as the way the birds feels. Unlike other ‘Angry Birds’ games, the birds’ powers actually change throughout the game — a direct result of the storyline. For instance, the Luke Bird has no particular powers at first, but at one point in the story when he discovers the Light saber, the weapon is added to the bird’s abilities, letting users do away with obstacles with that satisfying swing and buzz of the Star Wars franchise’s iconic laser sword.
[/blockquote]

This this version of game seems to have more paid in-app upgrades than all of their previous versions! But still its worth it. Here are user review: 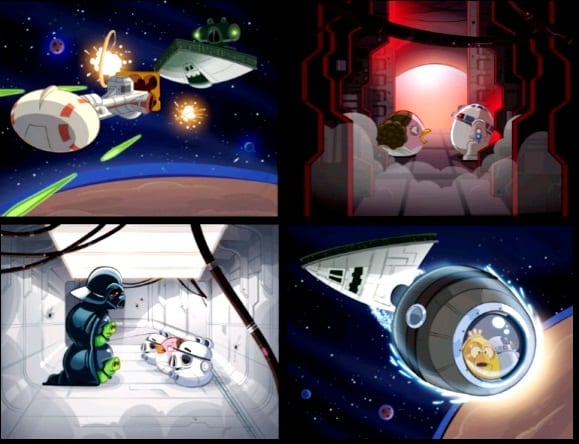