Apple has released the iOS 10 beta update recently. The new addition of Find My Airpods feature to the Find My iPhone app has remained the centre of attention. A part from this feature getting famous, they have rolled out another feature that is perfectly amazing for for cricket fans. Apple’s iOS 10.3 is An Update Cricket Fans Will Love.

Apple has assigned the task of telling people about cricket scores,stats and trivia to its digital assistant “Siri”. iPhone officials have announced that Siri will collect information from International Cricket Council tournaments and the Indian Premier League.

Apple’s iOS 10.3 is An Update Cricket Fans Will Love

Siri will also help their users know about team rankings, live scores. User will be able to ask them records of individual records, match dates and general information regarding match. 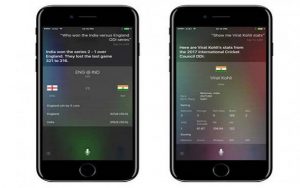 The launch of this exciting feature for cricket lover is not a surprise as Apple’s recent inclination towards fastest growing market of India was already in news. However Apple is late to launch this cricket related feature in market as Google had added cricket support system three years back.