The bigger the brand is, the more is the controversies. The same is the case with Apple. Being such an influencing company in the world, people look up to it every moment. Many things remain behind the curtain, but some catch people’s attention. It is reported earlier through a series of tweets that the iOS App Store is hosting several fake streaming applications. Through those apps, people get to see the pirated versions of the movies. Big, big, big!

Kosta Eleftheriou, in his tweets, shared that how Apple is being home to fake streaming applications. He is an app developer and a keen Apple critic. His most recent discoveries demonstrate that the App Store contains several streaming apps that contain pirated movies. He claimed in his tweets that all these apps pretend to be authentic services and deceive consumers by using the latest movies and photo effects. These apps, according to Eleftheriou, have over 2 million downloads and are producing a lot of income. 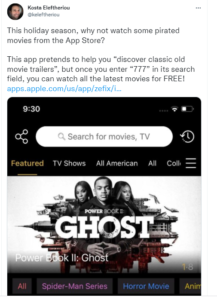 App developer revealed how Apple’s Store is host to bogus streaming apps storing pirated movies in a Twitter post. He explained that the software pushes users to add codes or share them with others to gain access to more functions. Premium membership plans are also available in the false streaming applications, which users can handle using Apple Pay. Apple is taking approximately 15% to 30% cut of in-app sales. He further added, that these apps are labeled illegal in reviews by many but users can still download from the App Store. All of the apps act as though they are something else.

Interestingly, Apple proved to be a good boy as it has accepted Eleftheriou’s findings and erased all of the unlawful apps he uncovered.

You may be also interested in: OnePlus 10 Pro first look leaked along with the release date