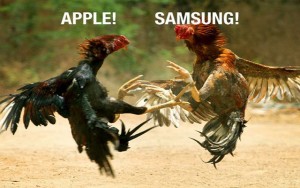 Samsung is Apple’s primary supplier of processors and memory chips for its devices like iPhone and iPad. On the other hand, Apple was also secretly helping Samsung to upgrade the android versions. Not just that Apple has to pay the loan of big amount to Samsung but this loan is converted to the “Gift Money” after the collaboration of two companies.

Both the companies knew that they are ruling the phone market around the globe. So their CEO’s mutually decided that together they can do wonders and can create monopoly over the telecom sector.They have named their company as “Sample”.

Tim Cook the CEO of Apple confessed in the combined meeting of Samsung and apple delegates that;

“We always used to steal the great ideas of Samsung. Yes I admit they have an impressive team when it comes to design the phone”

Moreover the never ending race between the Samsung S series and the iPhone series of the smart came to an end. Now both the companies will work together and launch the smartphone with combine efforts. They also have given name to that smartphone series as “SamPhone”

Got fooled with a “Samphone”? Look at the date and pass this news with your friend to give them a mini heart.