With each passing day we are listening to fake things these days. This time it is about fake chargers for iPhone damaging batteries. Apple Finally Comes up on the Issue of Fake Chargers. After research, the investigators have alarmed the iPhone users that they can face fatal risks as the fake chargers have failed basic safety tests.

Apple Finally Comes up on the Issue of Fake Chargers

The Trading Standards, which investigated the checks, said that:

“Counterfeit electrical goods bought online were an “unknown entity”. Of 400 counterfeit chargers, only three were found to have enough insulation to protect against electric shocks.

This issue came into limelight after Amazon got many complaints of fake phones as consumers were not satisfied with performance of batteries.

In October 2016; Apple revealed that a third party vendor is found involved in this issue by putting customers at risk by selling some fake chargers.

After that, Apple performed Trading Standards tests by safety specialists UL. During the test, a high voltage was applied to the chargers, which were bought from 8 different online stores of respective countries including China, US and Australia.

How to Spot a Dangerous Fake Chargers: 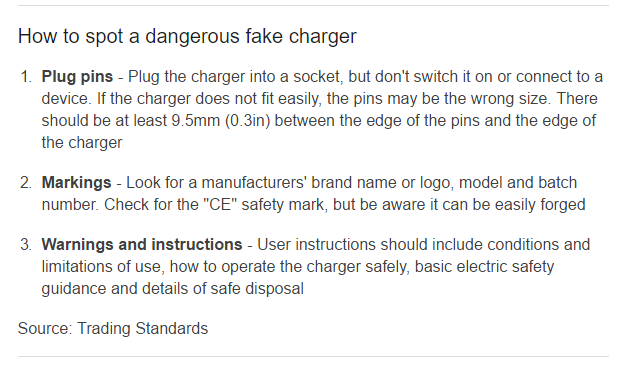 The company, Apple urged its consumers not to overcharge their devices and also to never cover their phones while charging.