A multinational brand consultancy, strategy, and management firm, Interbrand, has revealed the list of top 100 Best Global Brands. According to the report, Apple, Google and Microsoft Ranked Three Most Valuable Global Brands of 2017. Over the last 18 years, Interbrand has been ranking the value of global brands.

For the last five years Apple and Google have held the top two positions. This year, Microsoft hit double-digit growth to jump up to No. 3. The remaining Top 10 are Coca-Cola, Amazon, Samsung, Toyota, Facebook, Mercedes, and IBM.

This year the list showed the continued rise of technology-centric brands, especially among the top 10.  Microsoft has taken Coca-Cola’s place at No. 3, Amazon moved up three places to No. 5, Samsung moved up to No. 6, and Facebook broke into the Top 10 at No. 8–up from No. 15 last year.

“Brands embody the purpose and values of the business, helping us to understand them on a deeper level,”

“All of the Best Global Brands have a strong sense of purpose—not just in a CSR sense, but by having a higher-order reason for everything they do. Whether it’s to change the world with innovation, delight customers, or grow like never before, the Best Global Brands make it onto the list because that sense of purpose underpins their entire business strategy, making them highly-effective in the market and supercharging the metrics that determine their brand value.”

Here is the list of top five best brands, 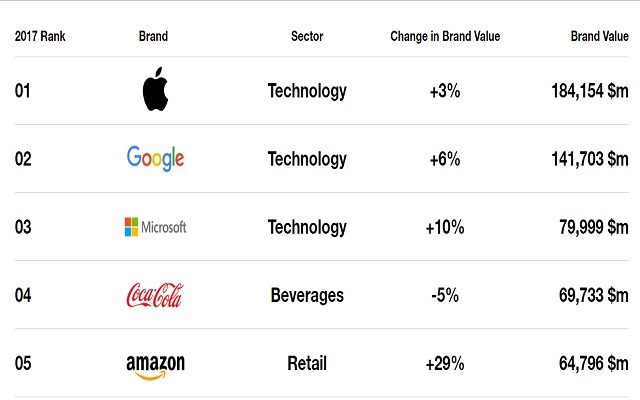