Many Android flagships have focused on fast charging technologies in recent times. Now some manufacturers are planning to provide 100W fast charging on their premium phones.

Although, it appears that the Cupertino-based tech company has plans to speed up the iPhone’s charging pace in the future. iPhone 13 might have 25W fast charging, according to a new report.

Also Read: PayPal users can now buy $100,000 of bitcoin and other digital assets 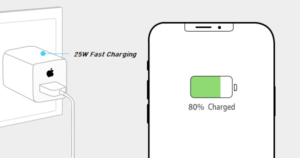 It’s no match for the 65W fast charging introduced by some Android smartphone makers, but it’s better than the 20W charging that the iPhone 12 series usually delivers. According to recent rumors, an A15 Bionic processor is expected to power the next Apple iPhone 13 series. Also likely to be offered a 1TB model in upcoming series, doubling the top-end option’s capacity, which is cutrently 512GB.

In addition, the phones are likely to have a smaller notch in comparison to the current model. Sunset Gold and Rose Gold are two of the new color choices that Apple will introduce in upcoming phones. As the launch date gets closer, we’ll know more about the phones.

You may be also interested in: The Apple Watch Series 6 Now Available in Stores