Apple no doubt knows and prides themselves about the innovations they bring about in the their different devices. The company popular for their keenness in their attention to detail, and its smooth, sleek products are pretty un-mistakeable. But at times even the Big Tech Apple gets it wrong. The few designs of Apple products that came under fire for their less than perfect designs were original Apple Pencil to the Magic Mouse. But the latest design touch that completely frustrates their users belongs to Apple’s most popular product i.e. iPhone. It might be one of the best camera phones, but the Apple iPhone new design is driving its users to hopelessness; when it comes to, taking calls, the iPhone could perhaps do better.

“Most garbage design ever made” 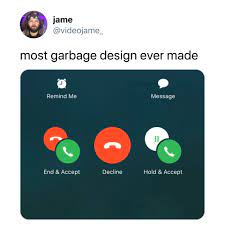 Its quiet funny how the different users of iPhone have quoted their experience with the new touch design as sheer panic, horror and terror, when the user is already on the call and has to attend the second incoming call and has to decide what to to tap? It is of no help when Apple throws a bunch of icons on the screen; it tangles the already tangled situation even more.

The Apple users while sharing their experiences said that he always hangs up on the wrong caller as its is one of the most confusing selection screen; another users sharing his experience added that his heart rate increases when he has to select from the screen. Another user expressed his feelings with great humor   that disarming a bomb is a lot easier than knowing what to press in the call selection screen. 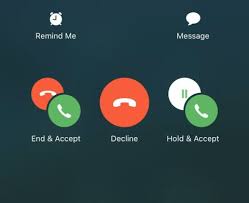 Still there are many other views about the same design touch which oppose the afore mentioned testimonies; A Twitter user said that its not that difficult to understand; another users defending the design touch said that the labels under the icons literally says what the icons do.

It’s clear that the design could be a little more intuitive and some users have even offered their own concepts for how Apple could improve the interface. Yanky Perl @YankyPerl shared his design to showcase the relationship between the two calls that gives more clarity of how a user can proceed before the second call goes to voicemail, which by many other users was praised and liked