Apple has recently introduced Business Chat to turn imessages into a communication platform. Apple targets to compete with Facebook Messenger. The tech giant, Apple wants to make iMessage the basic way to interact with businesses. Apple Launched Business Chat: A Platform Which Brings Shopping into iMessage.

At Apple’s Worldwide Developer Conference, the company has unveiled the details regarding this business feature. Business Chat is a part of iOS 11, that will let people to open an iMessage window from Maps, Spotlight or siri to start conversation with business. Such conversations includes basic text chats and you can also schedule appointments using it.

Apple revealed that Business Chat will be incorporated with the customer service products. Right now it has partnered with LivePerson, Salesforce, Nuance and Genesys. 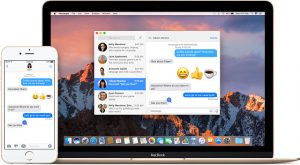 In the case of LivePerson, CEO Robert LoCascio said:

LivePerson’s goal is to “eliminate” voice interactions when it comes to customer service and sales. Business Chat moves the industry closer to that goal. The key is that the conversations are fully encrypted, allowing companies to include “real business processes. I really think this changes how consumers are engaging with businesses

The initial version of Business Chat is limited to human-to-human conversations as their are no chatbots involved. Apple should involve chatbots feature in future. Apple is now allowing developers and businesses to test and create integrations with Business Chat.

Also Read: Apple Updates iOS With ‘Do Not Disturb While Driving’ Mode