On Monday Apple announced the final versions of new emojis. These new emojis will be included in the new version of its operating system in different platforms expected to be launched by the end of this year. Apple Launched Hijab Emoji on World Emoji Day.

People who want to add Apple Emoji keyboard on their iOS device  go to Settings>General>Keyboard>Keyboards, and then tap on add new keyboard.

With thousands of emoji available on iPhone, iPad, Apple Watch and Mac, there are many ways to add personality to every message. New emoji include women with headscarf, Bearded person and Breastfeeding, and Food items such as Sandwitch and Coconut

Many People supported Apple for this move and congratulated Rayouf Alhumedi who sent her idea to the Unicode Consortium. She is just 15 year old with so many brilliant ideas. 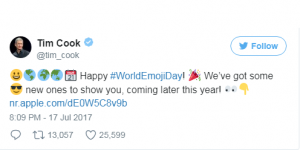 Fifteen year old Rayouf Alhumedhi submitted a proposal to Unicode in September 2016. She pointed out that there was no image that represented her.

Her online campaign, the Hijab Emoji Project, noted that some Christian and Jewish women also wear headscarves, along with hundreds of millions of Muslims. The hijab is a headscarf worn by many Muslim women who feel it is part of their religion.