Apple Vs Android, things are getting closer!

According to a report of ABI Research, Apple’s iPad share in the tablet market has stayed even at 55%. Whereas, Android covers 44% of its tablet shipments in Q3, which is good news as its OS is expanding on a faster pace than before.
[blockquote align=”right”] Apple Maintains Lead in Tablets but Market Share Down 14% in 3Q 2012
[/blockquote] 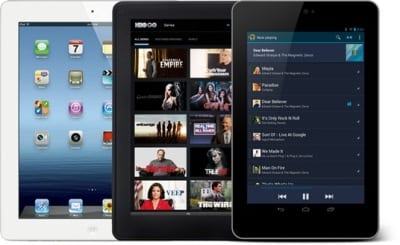 Google is working pretty hard at getting people to put more time into making their apps better for tablets.

This rapid increase is due to the devices like Nexus 7, which alone has been on a remarkable selling point i-e about a million units per month, which is expected to reach about 5 million until the end of the year. People love this device a lot and the Kindle Fire HD of the device contributes to success too.