Pakistan has witnessed a sudden boom in technology and the internet during the last decade. Especially after the introduction of 3G/4G by leading mobile network operators, there has been a rise in demand for smartphones in the country. Out of approximately 220 million population of Pakistan, there are 169 million cellular subscribers, 85 million 3G/4G subscribers and 87 million broadband subscribers. These figures clearly show the ever-shifting trend of Pakistani towards digitalization. No doubt, the mobile phone has empowered people towards innovation. The trend is further exacerbated with an unwelcomed guest- COVD-19, which has forced people to shift to digital technology and mobile phones are playing a pivotal role in the adoption of innovative skills. Be it e-governance, e-education, m-agri, or digital payments, everything that can contain the virus and make lives of easer can be done by having a smartphone and a good internet connection. Keeping in view the growing demand of smartphones in Pakistan, many new players, most of which are Chinese Smartphone Brands , had started promoted their brands in the country at the very right time

. No doubt, the digital Pakistan initiative, along with corona, has made this market riper for these brands than before. This is evident from IDC’s “Handsets Summary Pakistan Q3 2020” report, which clearly shows the growing market share of brands in Pakistan. 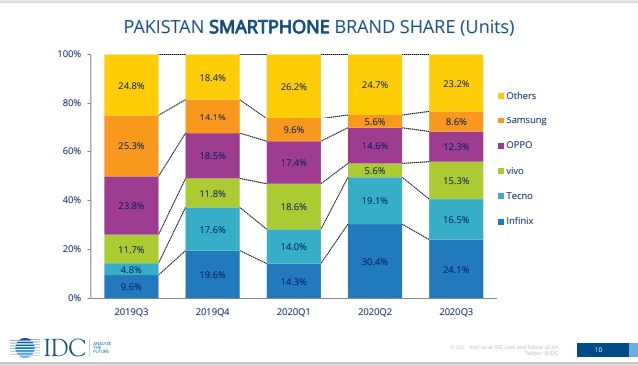 International Data Corporation (IDC) evaluated the mobile phone companies over their shipments during Q3 2020. As expected, the Chinese Smartphone giant Infinix, secured the top place by selling 24.1% units the total Smartphone Brand Share in Pakistan. Tecno secure second place with a 16.5% market share, followed by Vivo with 15.3 % brand share. Oppo and Samsung were able to achieve 12.3% and 8.6% market share in the country, respectively.

As far as the yearly comparison of market share is concerned, the market share of Infinix in Q1 2019 stood at 9.6%, which shows a tremendous growth of 14.5 percent in Q3 2020. The market share of techno in Q32019 was 4.8 % which means the brands has witnessed a growth of 11.7% in Q3 2020. Vivo has 3.4% growth as its brand share in Q3 2019 was 11.7%. The brand share of Oppo and Samsung has declined from last year, which suggests the smartphone market has begun to mature enough that consumers are looking at the different options other than these brands.

How was Infinix Able to Secure the Top Notch Position?

Infinix is proving great value for money smartphones these days. The result is not unexpected for me as Note Series, particularly the Infinix Note 7 had been selling like a hot cake throughout Pakistan. No doubt, the company includes flagship features in less price as compared to other brands like Samsung and Apple. Apart from that, their Hot Series, particularly the Hot 8 and now the Hot 10 is doing really good in the local smartphone market.

The Secret Behind Tecno’s Success- Chinese Smartphone taking Over the Market:

Tecno has intelligently captured the smartphone market in Pakistan by providing amazing value in the budget segment, just like Infinix. Their Camon Series, mainly the Camon 15 & Camon 15 Pro launched back in the first quarter of 2020, had been their bestselling devices under 30,000 PKR. They also targeted the entry-level smartphone users quite well by launching the Tecno Spark Series, particularly the Spark 5, which delivered a decent performance for its price.

Vivo-The Third one in Line:

In very less time, Vivo is able to take its place in local Pakistani market. If we compare the smartphones ranging from 30k and above, Vivo is the King, The reason behind it lies in the AMOLED display. So users looking for Good display in economical price usually opt for Vivo devices and Vivo Y51 & the Previous killer, the S1 Pro (Under 40K) very super hit due to AMOLED screen combined with decent mid-range chipset and camera technology. On the other hand, Samsung doesn’t provide that, you only get a Super AMOLED for under 40K, but that phone wouldn’t compete well in terms of performance when compared to Vivo. Also, their budget smartphones, particularly Vivo’s Y-Series, is securing good reviews from retailers and end customers as well. We also have got positives vibes about their latest entry, an Upper-Midrange, the Chinese smartphone Vivo V20.

Why is Oppo continuously declining?

Oppo came into limelight during the last few years due to their camera results. However, the smartphones they launched this year, in their A-Series including Oppo A9, A5, A31 are slightly over-priced and aren’t good camera performers too like they used to be. So, even a customer who shortlisted an Oppo phone changes his decision and chooses other brands that provided better value for money.

For example, the Oppo A53 is a great phone, but it comes with Snapdragon 460 an entry-level chipset for PKR 27,999. At around that price, you can get the Tecno Camon 16 SE, or the Infinix Note 7; even their upcoming Infinix Note 8 Series might be priced under 30K are smartphones that offer far better value than the Oppo A53.

Samsung is trying much to gain back their trust in the budget segment once again with their offerings in the A-Series & M-Series. The Galaxy A31, Galaxy A51 & the budget-friendly ones including the Galaxy A20s and the Galaxy A11 are good smartphones that offer great displays and for those who aren’t yet willing to go for Chinese smartphone brands easily go for them without hesitation. Their latest entries including the M31, M11 and the Samsung Galaxy S20 FE are surely going to improve their sales (in units in the Q4 2020). However, the market share of 8.6% clearly shows that people are now more comfortable in buying Chinese brands offering great devices at cost-effective prices.

With this mobile market share major shifts, Pakistan will also face some positive changes. As the Chinese market is getting saturated day by day, therefore Chinese brands are looking to Pakistan for future growth. Pakistan is a price-conscious market where large numbers of people belong to middle-class families who cannot afford pricey phones. Also, a large portion of the population comprises of youth who can’t afford to buy expensive phones. Hence, Chinese mobiles with lower prices and high-end specifications are considered the best possible option for most of the Pakistani smartphone users.