We have been listening to the latest arguments of Facebook CEO Mark Zuckerberg and Tesla & SpaceX CEO Elon Musk on “Artificial Intelligence” from last few days. The latest update of this clash of views is that Billionaire Musk Calls Zuckerberg’s Understanding of AI Threat as “Limited”. Mark is currently being lauded for his critical thinking and global vision, qualities that have helped him maintain his reign atop one of the world’s most successful companies in the world.

Let’s have look at some fighting words by Darren and Musk at Silicon Valley: 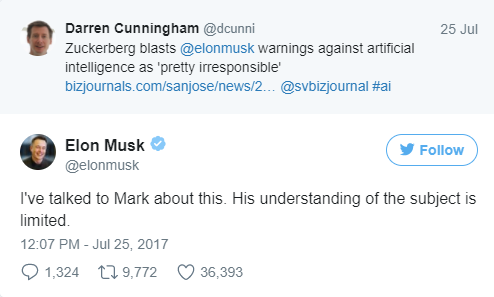 These replies were actually a response to the Mark’s recent Facebook Live session on the topic of “Warnings regarding Artificial Intelligence”. Without mentioning Musk by name in the live broadcast, Zuckerberg called such warnings “really negative” and “pretty irresponsible.” As he said:

“I think that people who are naysayers and try to drum up these doomsday scenarios. . . . I don’t understand it. It’s really negative, and, in some ways, I actually think it’s pretty irresponsible.”

Zuckerberg also argued that people “can build things and the world gets better.”

Let’s see who wins this cross argument at the end of the day and what we hear next on this matter.