Pakistan’s telecom industry has gone through a major transformation over the last decade, as previously there were only two operators with limited and expensive services. But now, we can see five operators who have currently launched their 3G/4G services in Pakistan. The fundamental reason that contributes to the increased subscriber’s base of all operators is actually the affordable packages, decreasing cost of devices and improved service quality across the country. Now we have cheaper mobile broadband & smartphones, SMS packages and call packages; which ultimately resulted in the improved telecom industry performance and quality of services while following the modern trends in world.

The foundation for growth and progress in the industry has been quite solid to the extent that even the recent Biometric SIM Verification could not damage the fundamental subscriber base as it was anticipated that it will come to almost half.

Instead we saw correction with only a reduction of 4.6 million subscribers in the entire first quarter of 2015.  According to Pakistan Telecommunication Authority (PTA) the total mobile tele-density has now reached 70% with subscribers divided among five mobile operators.

The market share of each operator indicates its standing in the market where Mobilink is leading the market due to its largest subscribers base. Telenor and Zong stood second and third respectively whereas Ufone and Warid have least market shares.

While comparing the month-on-month growth we can see that Ufone and Warid has lost many of its subscribers each month. Mobilink and Telenor are the only operators who successfully maintained their growth by providing attractive packages for their users. 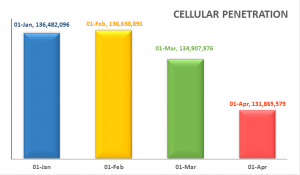 The recent terrorist activities in Pakistan has led the Government to verify all the un-registered and un-verified SIMs for security reasons. The cellular companies of the country have successfully completed the Biometric Verification of SIMs within the deadline that was provided by the interior ministry. 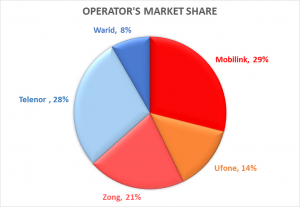 [pull_quote_left]The fundamental reason that contributes to the increased subscriber base of all operators is actually the affordable packages, decreasing cost of devices and improved service quality across the country[/pull_quote_left]

During this drive, a total of 98 million SIMs were blocked as they were not verified by the users while total 125 million SIMs were verified, as per PTA stats. The Government also asked the operators to re-verify the subscribers’ data, regardless of whether the SIMs were dormant or active. 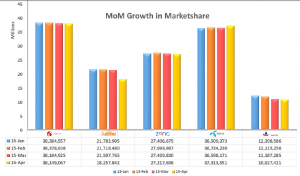 Although the outcome of SIM verification process led to a drop in user base and also to the additional expenses on bio-metric verification equipment but still it proved significant in indicating the correct market situation. Although the mobile operators considered it as a sole reason for declining their quarterly revenues and financial performance however, that is not the case. 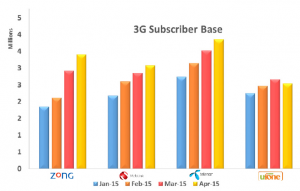 After the launch of 3G/4G in Pakistan, the mobile industry underwent fundamental structural changes. The operators have invested $1.8 billion on relevant infrastructure upgrade and licensing fees in 2014. After that 3G/4G subscriber base has grown slowly with presently 10% of the subscribers actively using 3G/4G services in Pakistan. 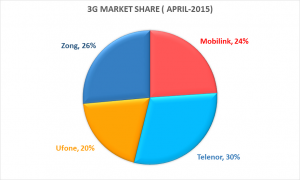 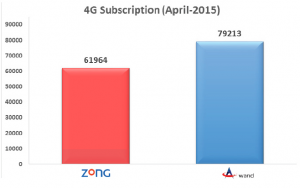 In comparison to past few years, an increase in the smartphone penetration has been witnessed, which is now 17% as many national and international smartphone brands became  available in the market.

Affordable devices and low cost internet packages after the launch of 3G and 4G in Pakistan has connected people to a greater extent. Only a couple of years back a 3G smartphone that cost more than Rs. 30,000 is now available for less than Rs. 5,000/= only, making it within reach of common man in Pakistan. Now that modern technology has become more affordable for the masses and 3G/4G coverage is becoming available in more and more cities, smartphone market is expected to grow even further.

Exemption of regulatory duty in the budget 2015

As per the updates regarding the tax imposition on mobiles import in the budget 2015-16, the price of low end mobile phones have been cut down. Although the Government of Pakistan has doubled the taxes on mobile phones whereas General Sales Tax (GST) that was earlier Rs. 150, 250 and 500 on lower, middle, and higher end mobile phones respectively will now be Rs. 300, 500 and 1,000 for the same categories of handsets. But on the other hand government has also exempted Rs. 200 import duty that was imposed few months back. Analyzing the previous year results and imports, unfortunately mobile phone import has shown a decline in the second half of FY 2014-15.

The previous market giants Mobilink, Ufone, and Warid have lost their market shares to Zong and Telenor. In last two years, Zong’s performance has been improved and it has emerged as the fastest growing mobile operator in Pakistan. On the other hand, Telenor has the gained the largest 3G subscriber base in the country. According to April 2015 stats of PTA, Telenor has 3.8 million 3G subscribers, while Zong holds second place with 3.4 million 3G subscribers. It is also expected that Telenor’s position will be further enhanced due to its recent collaboration with Facebook for bringing internet.org in Pakistan, as free internet will serve as an incentive for increase in Telenor subscribers.

Mobilink has recently became the first operator to provide 3G services in 100+ cities of Pakistan.

Through its 3G network, Mobilink has enabled the customers living in major cities and districts with high-speed internet on-the-go. As far as the service quality is concerned, Mobilink has recently signed a contract with China-based telecom equipment manufacturer Huawei to upgrade its existing network to 100 Gigabytes per second (Gbps) Optical Transport Network (OTN), a first of its kind project in Pakistan. The 100Gbps OTN will be deployed across a long haul fiber network on a nationwide basis which shall facilitate Mobilink in fulfilling the ever growing data and speed requirements of subscribers and guarantee the introduction of differentiated services in a bid to remain Pakistan’s number one Telco. The decision by Mobilink to upgrade its nationwide optical network will ensure an improved experience for its subscribers through the availability of greater bandwidth, efficiency and reliability.

[pull_quote_left]In last two years, Zong’s performance has been improved and it has emerged as the fastest growing mobile operator in Pakistan. On the other hand, Telenor has the gained the largest 3G subscriber base in the country[/pull_quote_left]

The launch of 3G/4G provided another opportunity for all five operators to increase their subscribers by offering affordable packages. In this regard, Telenor and Zong are leading the market whereas Ufone has least subscribers due to its limited 3G packages, network coverage and caps on data bundles. Although Ufone was the first operator to launched 3G in Pakistan but unfortunately it didn’t maintained its standing in the market due to mentioned reasons.

According to stats from Pakistan Telecommunication Authority (PTA), it can also be concluded that Telenor and Zong are the main players in the market while Mobilink comes at third and Ufone at last as far as market share is concerned.

Warid Telecom, the only operator that transformed itself directly from 2G to 4G LTE network, has the highest number of LTE subscriber base in Pakistan, whereby an astounding 79,000 customers subscribed to the network in only 6 months. With the launch of 4G LTE and having the most 4G LTE customers in Pakistan, Warid has presented creative Data Sharing Plans and 4G LTE Mifi devices.

After the launch of 3G/4G in Pakistan we have seen an increase in the number of mobile broadband users. Most importantly, the coverage area of 3G and 4G LTE services is also expanding to the major cities of Pakistan which will also result in increased subscriptions.

The Ministry of Information Technology and Telecommunications (MoITT) intends to take contributions of telecom services up to 1.4% of the Gross Domestic Product (GDP) by 2025.

Also the Ministry wants to increase exports of telecom sector from $1.4 billion to $4 billion by 2020. Telecom Policy of Vision 2025, if successfully achieved, will prove helpful in increasing the national economy of Pakistan while generating Rs. 800 billion in coming years. Also the left over spectrum auction of 3G/4G will further increasing the cellular penetration in Pakistan while bringing prosperity to the country. 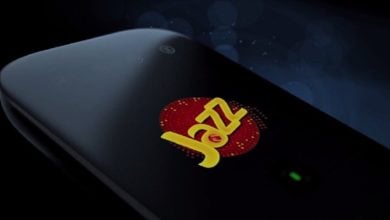