The six-second Video Messaging app Vine has officially emerged under a new name ‘Byte’ and over the weekend, it got off to a rocky start. Byte video app developed by Vine co-founder Dom Hofmann that produces short looping videos, has been launched on Android and iOS.

Byte might just have been born yesterday, literally, but the content is already flowing steadily into Vine’s six-second looping sequel. Byte founder Dom Hofmann was, in fact, Vine’s co-creator, and while the former died in 2016, the new model has a similar product and community-style.

Byte can be downloaded on both iOS and Android. It allows you to create and upload looping videos in six seconds. It is still early days though. So, it does not require side-by-side video reactions at launch, and it has no filters or enhanced effects on reality. Hofmann has predicted the arrival of these features soon.

Although Vine may no longer be a thing, short videos are alive and well, with apps such as Instagram and, more recently, TikTok capitalizing on the format by making creative clips simple for the users. Byte is the newest mobile app that replicates some of what made Vine grow so fast, and several former Vine stars (aka Viners) have already joined and started sharing their first new content.

How does Byte Video App work?

Like TikTok, Byte is also available on iOS and Android and provides users with the content feed from people they follow, as well as a new content page, a search page, and a profile page.

The content is served on an infinite loop through a series of videos, close to the “For You” page on TikTok. Users can upload videos that they have taken off the app, or use the built-in camera of the app to take six-second videos that can then be posted to their account.

Byte has a navigation bar at the bottom of the screen, with the following tabs: home, scan, camera, action, and profile.

You can upload videos you’ve shot or use the built-in camera of the app to capture six-second videos if you want to start contributing to the new Community.

Communication With Creators a Priority

Byte’s other way of differentiating from other sites is by prioritizing contact with creators through its community forum.

You can hear directly from the developers themselves in the Announcements forum for all of the latest information on Byte.

Monetization Already in the Work

Byte is in the early stages of creating a partner program that will pay users for content creation. This may help draw developers away from more developed applications such as TikTok where there is currently no way to directly earn money from videos.

The history of Byte

Vine co-founder Dom Hofmann announced on Twitter in 2017 that he was about to actively create “a follow-up to Vine.” He said that he had been “feeling like it” for some time and that he had seen a lot of tweets and direct messages, probably from fans of his old app. He also said that he was funding the project himself. 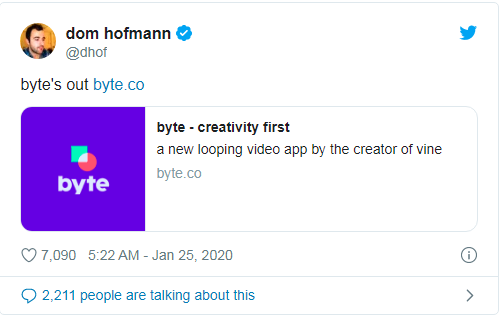 He originally called the successor “V2,” and Hofmann approached former Vine stars and other social media personalities and influencers to round out the production of the app and work out the monetization aspect. As a result, several product details have leaked in recent years, including that the app will concentrate on recording six seconds of video.

Is it Already on HomeScreen

What Hofmann hopes will distinguish Byte is an early focus on helping content creators make money— something that is still not provided by TikTok and other micro-entertainment apps. The company plans to launch a partner program pilot soon to provide monetization options for people who are famous for Byte. Famous former Viners have already joined Byte and started creating content. For weeks before the launch, other users were given the option to beta-test Byte so there is a mix of new and slightly dated content circulating.

The new app, released on Friday on Android and iOS which allows users to shoot and upload six-second looping videos. The designers wrote on the Apple App store that consumers should see the app as familiar as well as modern.

The big question now is if Byte video app would take off given its late start. Do people need another short-form video app between TikTok, Snapchat, Instagram and more? Winning here will require high-quality creators to seduce, who elsewhere can get a larger number of views. The big giants have already captured the market, its time for BYTE to come out loud.