After providing good ride-hailing transportation (Cars, bikes and Rikshaws) to the people in all major cities of Pakistan, careem now provides Careem Boat to sail in the streets of Lahore. Everyone knows that Lahore is flooded with heavy rain and social media is full of images trolling Shabaz Shareef for turning Lahore to Paris.

Lahore witnessed the heaviest rainfall in the last 38 to 40 years. Due to this heavy rainfall roads of Lahore have turned into rivers. Careem never misses the chance to make its users laugh and remain active on social media by promo codes related to the current affairs. The ride-hailing services shared an image, telling that Careem boat is on way.

The Careem app users received a message from the ride-providing company on Tuesday that read “All aboard Careem Boat! Book a Careem Boat now & anchor through the rain!” 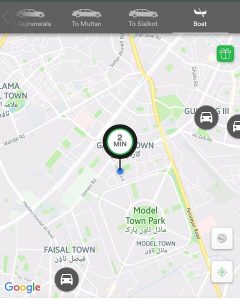 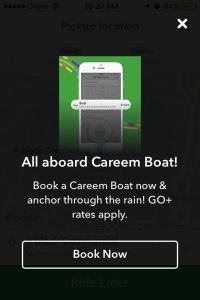 Lahore After The Rain*
Haters Will Say Its Paris. pic.twitter.com/OcjlkS40jl

Now this is Funny:

From Paris to Venice via Lahore! pic.twitter.com/htzPmtT7NA

As far as marketing campaigns are concerned, Careem is seen very active on social media. We should accept it that Careem has one of the best marketing team, however, Uber lack this as here social media pages have nothing to engage customers. Careem has always tried to bring something new and funny at doorsteps such as, Rishta Aunty Service, Bakra-on-Wheels, Qurbani Hides, Careem Air etc. These marketing campaigns of Careem became so famous on social media platforms just like the Careem boat campaign.

Also Read: Careem & Uber are in Preliminary Talks to Merge in Middle East