Fear of losing your mobile device is just one of a number of new phobias that the rapid pace of technological advance has birthed. Nomophobia is a term first coined by British researchers during 2008 to denote people who experienced anxiety when they had no access to mobile technology—such as their mobile phones.

Anxiety about going phone-less manifests itself in telltale signs. People who are said to suffer with nomophobia report being unable to turn their phones off—ever. They worry over running out of battery power. They constantly check for new emails and text messages and calls. And they don’t even want to go to the lavatory without their phones. 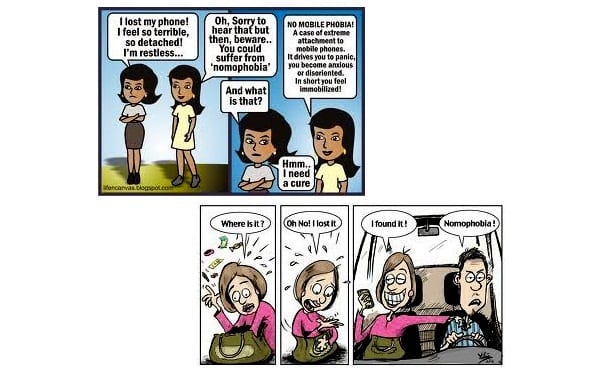 A survey by SecurEnvoy found that 41% of people have two phones or more. Half of those mentioned they would be upset if a partner looked at messages or texts on their devices. The numbers get really interesting when you look at specific demographics.

• 70% of women, compared to 61% of men, worry about losing their cell phone.
• Men are more likely than women to have two phones, 47% to 36%.
• Youngsters have higher numbers of people that would feel distress of being without their mobile phone.
• In the 18-24 age group, 77% revealed nomophobia.
• In the 25-34 group, that number drops marginally to 68%.
• A surprising fact is that the third-most nomophobic group was the age-55 and over group.

It got me to thinking, though, about how recent innovations in technology may be leading to this and other types of new phobias.

Start wondering if you are unable to turn your phone off – ever, or if you obsess over battery usage and constantly check for new messages, those may be signs. In addition, constant checking for calls or taking your device with you to the bathroom may be part of the symptomatic reality of nomophobia.