CEO of Twitter Mr. Jack Dorsey has just confirmed about the departures of senior officials of Twitter from the office. The CEO Jack called it “bold rethinking” and also confirms that:

“Four senior Twitter executives are leaving the media company, which is also adding a new chief marketing officer and two board members. Media head Katie Jacobs Stanton, product head Kevin Weil, and the head of the engineering division, Alex Roetter, will all leave the company. Beside this the Business development leader Jana Messerschmidt may also depart.”

Some of these executives are leaving under pressure whereas the rest are leaving on personal will. The company is also planning to announce new board members in coming days. Jack confirms their departure on his official account of Twitter: 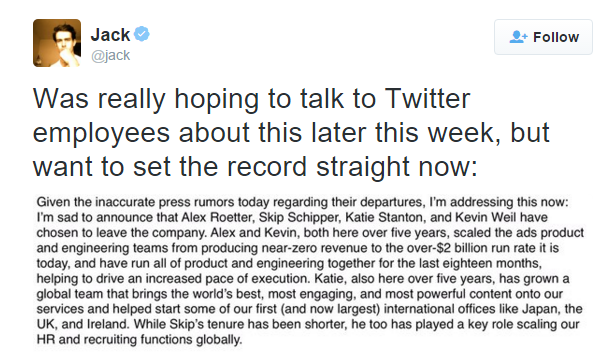 The fundamental aim behind these changes is to re-bold the company’s structure and take to higher level; while launching new products e.g. Moments. By adding Moments to the 140 character limited option of Tweets, the company aims to generate and attract more traffic.

Previously, the company performance has remained unimpressive as it has showed lowest user growth last year which is 300 million whereas Instagram has surpassed it by having 400 million users during 2015.