It is hard to believe that Google Chrome has been working since 2008 and has successfully completed 10 years of its work. Chrome is all set to make the browser as secure and easy to use as possible. All the latest improvements announced earlier this week are an important step towards that goal. Recently, the company announced that Chrome is going to adopt fingerprint authentication on Android. Chrome Fingerprint Authentication On Android will provide increased security to its Android Users. 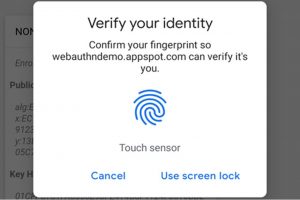 The developers have also announced another interesting change. The browser will no longer include the Android and iOS build number in the user-agent identification string. It will be possible after starting this new version of chrome.

All the new changes made are to prevent exploit targeting, fingerprinting, and other abuses as they can lead to personal data breach. So, it will be a good step in achieving their goals because Fingerprint authentication will increase the security. Furthermore, it will not let anyone exploit targeting. The browser will be more secure and easy to use.