There is a saying, “Behind every successful man, there is a woman”. In today’s modern times the role of woman has expanded many folds and now she is not only behind the success of a man but she also plays an important role in the success of a nation.  Around half the population of the world comprises of women. In Pakistan also, out of total 207 million people, 101 million are females. Women are an integral part of any society who plays an important role in the development of a country. Therefore, they should be provided with platforms to utilize their talents and bring revolutionary changes in the country. The advent of technology has opened many such venues but unfortunately, large portion of female population lags behind in internet use and access.

Number of unconnected women is much higher as compared to unconnected men, gender gap in mobile ownership is also quite high

According to GSMA, after the launch of next-generation mobile services, mobile phone ownership has considerably increased but still 21% women are less likely to own a mobile phone as compared to men in the USA. This figure increases to 23% for women living in Africa and 24 % for women in the Middle East and 37%, if she lives in South Asia. These stats show a significant gender gap in mobile ownership around the world and require great attention of all industry stakeholders.

According to PEW research center’s 2016 report, only 9% of women own smartphones vs. 22% of men in Pakistan

The benefits of mobile phones for women are countless; it gives access to educational, health business and entrepreneurship opportunities. Mobile Phones not only empower women but also contribute to economic growth and productivity. It empowers women to take charge of their lives by doing things themselves and lessening dependence on their male counterparts. But due to various reasons not only the number of unconnected women is much higher as compared to unconnected men, but gender gap in mobile ownership is also quite high.

Pakistan is one of the countries where unconnected population and the gender gap in mobile ownership is very high. According to PEW research center’s 2016 report, only 9% of women own smartphones vs. 22% of men in Pakistan. There are a number of reasons that have contributed to this huge gender gap including:

These barriers have not created gender gap in Pakistan only, rather have created impact around the world, especially in developing countries. The South Asian region has the highest gender gap of 38% in mobile ownership since the socio-economic situation of most of the countries here is same.

In today’s world where 5G, IoT, and smart cities concepts have become a new reality, unconnected population and mobile gender gap creates interference in the digital revolution. Therefore, the Government needs to focus on accelerating digital and financial inclusion for women. 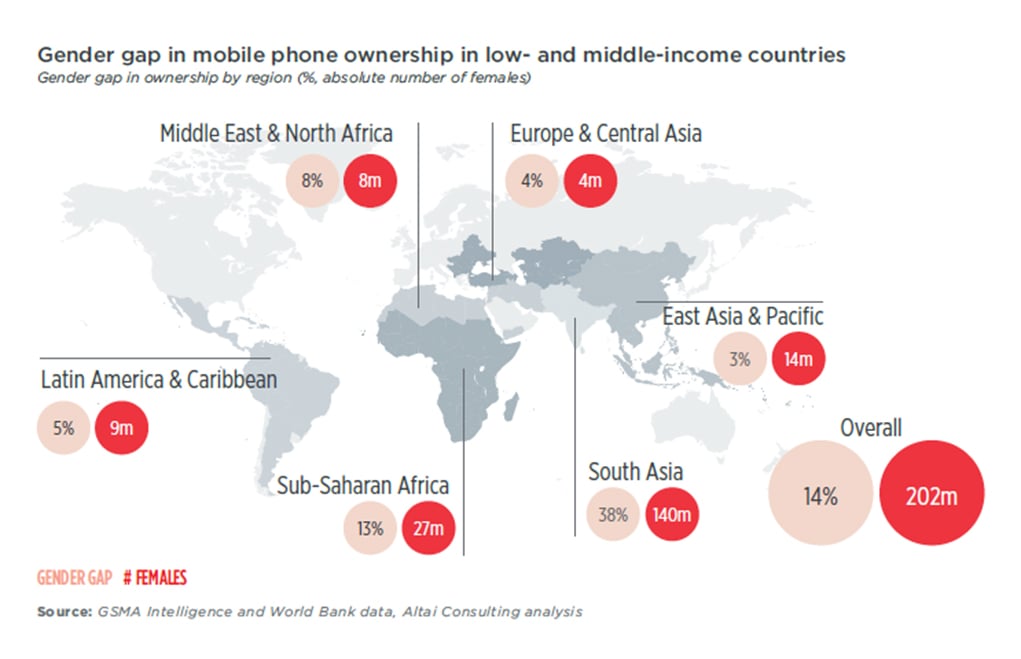 Closing the Gender Gap in mobile phone ownership has the potential to unlock substantial benefits, not just for women but also for the entire mobile industry and the broader economy. Mobile can help in women empowerment by making them safer and more connected while also opening access to information and life-enhancing opportunities such as health information, financial services, and employment opportunities.

In a society where social norms restrict women’s access and use of the smartphone, we need to sell the idea to men in order to reach women

Government and other stakeholders should collaborate in order to create awareness about the importance of mobile phone ownership and motivate women to master the mobile technology without relying on other members of the house. In a society where social norms restrict women’s access and use of the smartphone, we need to sell the idea to men in order to reach women because no matter how aware a woman is, if she doesn’t have the support of his male family members, she can’t do much.

Availability of affordable smartphones, mobile data, and improved network coverage also hold great importance to connect the unconnected. This is only possible when the government will show support to MNOs and OEMs by providing the supportive business environment. Operators and internet companies should work together to develop an understanding of digital gender gap and its negative impact on the society. Mobile Operators and device OEMs can easily change the mindset of people by their message oriented marketing and advertising. Many women in Pakistan do not own smartphone due to security and privacy reasons, therefore, mobile services should be built that increase women safety. Women-focused content should also be produced to increase their involvement and improve their technical skills, literacy, confidence and digital skills.

Above all, the collection of gender-disaggregated data on access and usage needs to be collected and analyzed as it is essential to design appropriate policies and strategies to overcome mobile gender gap.

Smartphone has gone way beyond basic calling and texting; it is transforming the way we communicate with each other and our environment. People can use mobile to access health information, banking and commerce, education, agriculture and employment opportunities. All of this pools up into social and economic growth and productivity. The mobile gender gap around the world is an alarming situation which needs to be tackled on priority to reap full benefits mobile revolution.