The world is more progressed than we are thinking and reading about it. Drones and IoTs are no more a dream to come true rather nations are presently exercising them. Worldwide countries are becoming connected and smarter with each upcoming technology. One such example is of the Government of Dubai which is really pursuing its Vision 2025 while incorporating drones, robots and flying cars to facilitate its citizens. Now Dubai has launched Driverless Taxi Service.

The self-driving cars were being tested on Dubai Street yesterday.  The autonomous self-driving taxi was showcased in Gitex 2018.

Launching the test run of the first ‘Autonomous Taxi’ in #GITEX2018. For more details about our initiatives, visit our stand S2C1 at Sheikh Saeed Hall in the Dubai World Trade Centre. pic.twitter.com/GjNqmcFL2n

According to transportation official, in the next three months thee driverless cars will be made operational in some of the parts of Dubai. RTA revealed that this driverless car in Dubai can go up about 20 mph and can accommodate four passengers. On the front, there will be a safety driver who will take control over the car if needed. 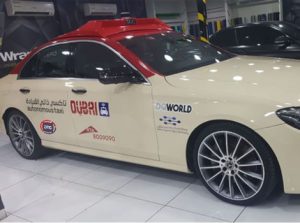 However, in Promo, a car is shown without any driver which showcases the overall driverless experience. Maybe the overall driverless experience will be introduced later on. The self-driving cars in Dubai have modified Mercedes-Benz sedans with cameras, sensors, and LiDAR system built into the car.
Dubai is progressing at a very fast pace and it is evident from different advancements, the country has made in the last couple of years.