Can we imagine a city where driver less vehicles, mini-buses and boats move people around on time and with minimum disruption. Such driver less mobiles do exist in Dubai. The Dubai metro bus is fully driver less. Same is the case with Phase II of Dubai Tram which has fully driver less trams.Dubai to be a Global Driverless Mobility Leader by 2030.

Dubai has hired the world’s biggest RFP to global R&D centers to apply the Autonomous Transportation Challenge to Dubai. The metropolitan city plans to represent itself as the world’s largest R&D lab for driver-less transportation. It offers a unique model for the future of city.

Dubai to be a Global Driverless Mobility Leader by 2030

Sheikh Muhammad Bin Rashid Al Makhtoom revealed that by 2030, 25% of total Dubai trips will be driver-less. He further told that this strategy will help increase traffic efficiency, productivity, reduce traffic congestion and pollution & save millions of driving hours.

Dubai Transport Authority (PTA) has commissioned a study on deployment of driver-less shuttle buses and taxis.

Dubai is leading the cities of the world by taking a big leap in the adoption of artificial intelligence to serve humanity. Today we put forward clear and precise goals for Dubai Autonomous Transportation Strategy, making it one of the main pillars to achieve a sustainable economy for the emirate. 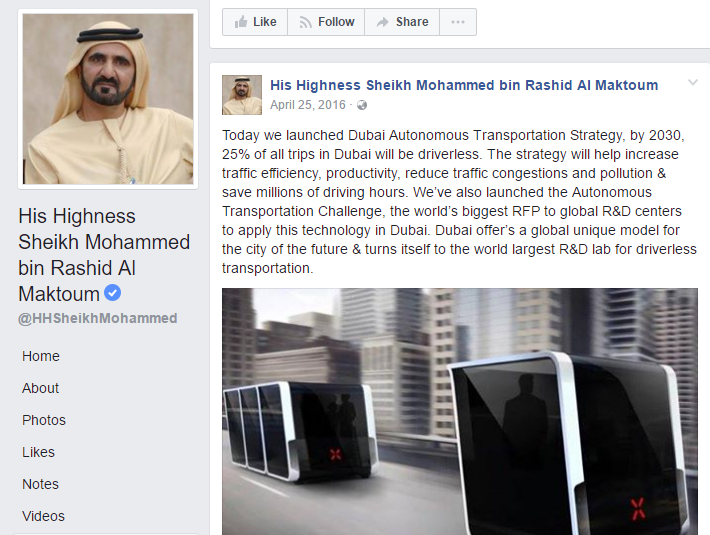 Sheikh Muhammad Bin Rashid focused on some global challenges including infrastructure which includes high resolution & regular update of maps. Second main challenge is related to laws and legislation that include technical inspection specification and licensing.

This project aims to reduce accidents and losses by 12%. This percentage is equal to savings of AED 2 billion yearly and increase the productivity of individuals by 13 percent. It is projected to save 396 million hours on transportation trips yearly.