Punjab Information Technology Board had previously deployed new Ticket Charging System for Traffic Violations that uses Android phones and Bluetooth Printer to get the job done. With this system, Police Officers will be able to charge traffic violation tickets on the spot.

When a defaulter is caught, the police officer enter the driver’s license plate number into an Android App which will then be authenticated by sending into central database. The database will then input the type of violation into the system, and it will be printed out through a portable printer. The driver can pay the ticket charges in order to get the license back.

Now the improvement has been incorporated in this system by the introduction of CCTV cameras. Due to the system of e-Challan working with CCTV cameras, about 1000 citizens were sent e-Challans for breaking traffic rules in Lahore. CCTV-generated pictures of number plate or vehicle will also be attached with the challan. 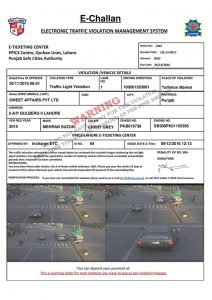 This new introduction caught traffic rule violators through CCTV cameras and over 15,000 traffic violations were observed in a month on Mall Road. According to the PSCA, these encroachments only include those who were breaking lane rules and not obeying traffic signals. Deadline to pay challan dues is within 15 days.

In future this e-Challan system will help to observe the issue of bribery inside the police force through CCTV cameras. In this way e-Challans will be sent to the homes of those defaulters.

The introduction of CCTV cameras to electronic system of charging tickets will not only speed-up the whole process, but will bring in more transparency to once notorious traffic ticketing system.