E-Stamping, a flagship project of PITB, is aimed at automating the stamp issuance system in Punjab. The other stakeholders involved in this project are Board of Revenue (BoR), Bank of Punjab (BoP), and an outdoor vendor, Techlogix. A meeting of all of these stakeholders was called on 26th June, 2015 by PITB to plan the set of activities for the launch of SMS based stamp paper verification system for Lahore Treasury Office.

The main objective for this e-stamping system is to prevent paper and process related fraudulent practices, leakage of government revenues, and store information in electronic form and build a central database to make ease of the verification process

This system will allow the citizens to verify stamp papers and is going to launch on 1st July, 2015. For further details about the initiative an image has been attached: 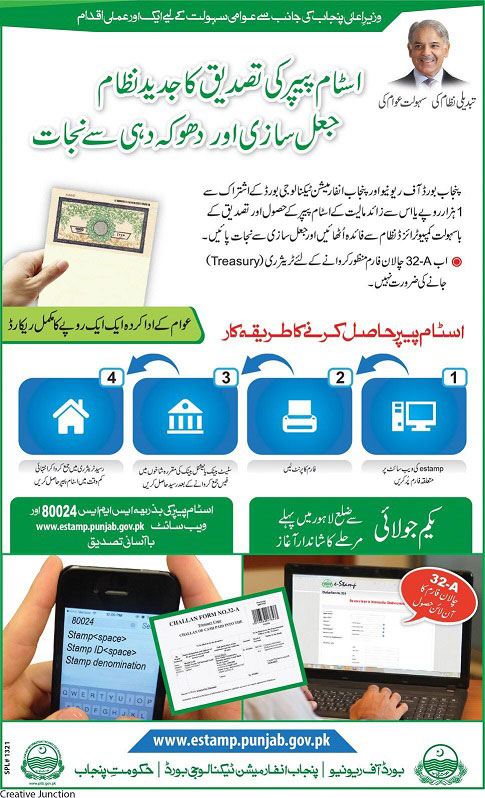 E-stamping was initially proposed by the Punjab Board of Revenue in November 2014 to facilitate the citizens online, and it was launched for the public after one month. E-stamping ensures streamlining property and business transaction in Punjab. It is to minimize the fraud and fake stamp-papers purchase and sale. Since then it has actually minimizes the number of fraud and fake stamp-paper purchase and sale. Therefore it is a step-forward in the history of Punjab Government to make transactions online.

e-Stamping: Punjab introduces an online system of stamp issuance and powered by PITB as launch of SMS based stamp verification system for Lahore Treasury Office is now officially announced

Hence, the launch of SMS based stamp verification system for Lahore treasury office is a good news for all those who were once afraid of the frauds in the transaction business. Feel free to do all the online business transactions within Punjab and keep your business away from all the frauds.