The European mobile market had an average year in 2020. The COVID-19 pandemic wreaked havoc on the country, causing market driven issues. Meanwhile, economic problems and job insecurity forced customers to save rather than spend, and widespread lockdowns stopped many consumers from visiting retail stores and buying new devices.

Over the summer, fewer cases and fewer limitations led to a rebound, but the virus returned with a vengeance. COVID is a virus that infects humans. In September, 19 new cases were identified, triggering new lockdowns across Europe starting in November. Overall, the European mobile market shrank by 14% in 2020 relative to 2019.” 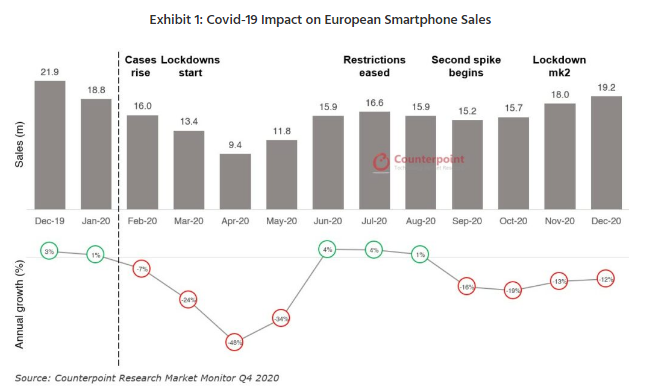 Xiaomi was the big success story in Europe in 2020, overtaking Huawei to become the region’s third largest OEM. Good success in Spain and Italy over the year resulted in substantial share increases (28 percent and 17 percent of smartphone sales in Q4 2020, respectively), driving overall annual growth of 90 percent.

Huawei has all but abandoned the European smartphone market due to its failure to manufacture affordable smartphones as a result of US sanctions.

Samsung has had a difficult yet very challenging year. Even though it increased its market share marginally, this was due to the fact that its sales did not fall as much as the overall market. Samsung didn’t seem to be able to capture as much of Huawei’s declining market share as it might have expected, owing to significant challenges from all sides.