Samsung Galaxy S22 Series is expected to launch this December. Since the launch date is coming near, we are getting more rumors regarding S22 and we are getting more excited as well. Till now we are getting information regarding the improved camera however from rumors we have also got to know that this upcoming device will have Qualcomm’s Snapdragon 895 chip or its own Exynos 2200. The device is expected to have a thinner display as compared to its previous devices and a possible under-display camera.

Everything you need to know about Samsung Galaxy S22 Series

So below are the rumors regarding the S22 series which might be right or wrong.

According to rumors from tipsters, the Galaxy S22 will launch in early 2022. However, another report has revealed that the device is expected to launch on February 28th ahead of MWC 2022. In either case, we will be able to see the device by the Q1 of next year.

According to Ice Universe, the device might reach during early December 2021. If it’s true it can help Samsung with competing against iPhone 12 and the upcoming Pixel 6 device.

As far as price is concerned, we have not come across rumors but we can expect that Samsung will keep the prices similar to the Galaxy S21 lineup. It means Galaxy S22 will cost $799, the Galaxy S22 Plus will be $999 and the Galaxy S22 Ultra will be priced at $1,199. 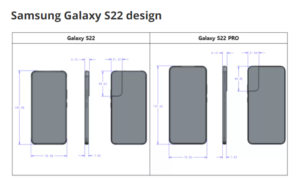 A difference in S22 is an addition of an under-display camera, which is considered as one of the features behind Galaxy Z Fold 3 success.

The ultra version of S22 makes things more interesting as the dummy units of this device show that it could have a blockier, squared-off design that reminds us of  Galaxy Note 20 Ultra.

On the other hand, OnLeakers have shared unofficial renders of the Galaxy S22 family. In that Galaxy S22 Ultra camera module is P-shaped. The device also includes an S Pen dock, which wasn’t seen in the dummy units.

Moreover, we have also come across new renders that give an entirely different approach to Galaxy S22 Ultra’s P-shaped camera. This render keeps the same P-shaped camera module but splits it into two modules. One of the modules includes a trio of cameras and the other one holds two cameras

Mauri QHD which has remained a very authentic leaker claims that Samsung is reducing the display size for the Galaxy S22 Lineup.  Galaxy S22 is expected to be 6.06 inches and the S22 Plus would sport a 6.5-inch panel whereas Galaxy S22 Ultra would be 6.81 inches.

We have heard that two firms are going to partner with Samsung in other to come up with great cameras for upcoming smartphones. Samsung  Galaxy S22 Ultra will be the first phone to get the new tech. Olympus has recently announced its intention to collaborate with other firms, so we can expect that this collaboration will be announced soon.

According to rumors from the Ice Universe,  Galaxy S22 Ultra will come with a huge 108MP sensor to compete with iPhone 13. Furthermore, Samsung is concentrating on image signal processing and computational photography this time instead of pixel count.

Contrary,  Samsung Galaxy S22, and S22 Plus could include a 50MP main camera lens, plus 12MP ultrawide and telephoto lenses.

Samsung Galaxy S22 series would be powered by  Snapdragon 895, which is said to be a 4nm chip. Moreover, Samsung can also get a major boost in graphic power, with a GPU based on AMD’s rDNA 2 architecture, which happens to underpin the PS5 and Xbox Series X.

This is considered one of the most important aspects when buying a smartphone these days. Ice Universe has revealed that Samsung is testing 25W, 45W, and 65W charging for the S22 series.  The leaker also claims that  Galaxy S22 will offer a 3,800 mAh power pack while the Galaxy S22 Plus will use a 4,600 mAh battery. The Galaxy S22 Ultra is expected to retain the 5,000 mAh size of its predecessor.