According to several rumors soon OnePlus is going to unveil its latest smartphone, OnePlus 6. It is to be expected that, OnePlus 6 may come with an iPhone X-like notch. In previous leaks, there were some information about features but not in detail. While a new report has revealed more information about the upcoming OnePlus 6. Exclusive: OnePlus 6 to Have Notch Display

Sources has claimed that the OnePlus 6 will have an iPhone X-like display notch and will have some high-end specifications. The device will come with the Snapdragon 845 processor. According to the leaked screenshots showcase a large status bar, further confirming the notch. The OnePlus 6 may have a display with 19:9 aspect ratio, taller than the 18:9 panel of the OnePlus 5T.

Exclusive: OnePlus 6 to Have Notch Display

Leaked images shows, the prototype OnePlus 6, with the model number A6000, that scored 2,76,510 in the AnTuTu benchmark. The benchmark score beats every Android smartphone. That shows the OnePlus 6 would come with the Snapdragon 845 SoC.

However, this should not be astonishing for readers, because OnePlus CEO Pete Lau had announced in January that the next flagship phone from OnePlus will be powered by the new processor. OnePlus 6 may come with specs like 6GB RAM, 64GB inbuilt storage, Android 8.1 Oreo, and a vertical dual-camera setup.

The OnePlus 6 will be launched in June with the Snapdragon 845. The launch date is confirmed by company’s CEO. According to previous rumors, we are expecting a glass back and dual rear camera too in OnePlus 6. 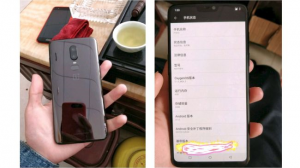 Screenshots also indicates that back looks to be glass, rather than metal, and the dual-lens camera is in a different position to the OnePlus 5T. You will still find a fingerprint scanner though.

The above screenshot shows that OnePlus 6 will have a fingerprint scanner built into the screen. The expected price of OnePlus 6  will be more than $479.