Recently, Vivo rolled out its premium camera smartphone, the vivo V21 that has redefined night-time photography. The V21 has a remarkable imaging system and camera-focused features, due to which it lets users capture their best moments at night time. The extravagant design and unparallel features make this series an enviable one. If we have to describe the V21 in one line, we would say that it renders an outstanding mobile experience where technology meets style.

It happened a number of times with us where we haven’t been able to capture clear pictures at night because of low light. Photographers and content creators face impediments during the nighttime due to ‘unclear and noisy images’, and most of the cameras struggle to focus. When you tap on a picture in a particular background light or an environment that is not appropriate for your camera technology, the final photo may be ‘blurry’ or ‘pixelated’. Thus, the camera fails to replicate the true colors of the visuals, which may lead to overexposure.

To enhance the night photography experience, vivo has introduced Optical Image Stabilization (OIS) technology in the newly launched V21 smartphone. As we know that holding phones steady during long hours of shooting can be really exhaustive and annoying. Therefore, the provision of OIS is a great addition and allows users to capture ultra-clear and stable images.

What is Optical image stabilization (OIS)?

Primarily, OIS is a hardware solution that removes the chances of unclear photos because of external forces. Consequently, the stabilization technology provides much clear and enchanted images.

Some views of Tech Geeks Regarding V21:

As the new vivo V21 is primarily designed for the young, tech-savvy, fashion-forward users, so let’s see what views our young tech and the fashion-driven audience have regarding the V21:

It comes with a 90Hz high refresh-rate display for a smooth smartphone experience and supports 8GB RAM and 128GB ROM. The Ultra-Slim device with 7.29mm is easy to hold.

vivo V21 has redefined camera dimensions with its Optical Image Stabilization system and has taken photography a notch higher.

In another video on WhatMobile’s YouTube channel, Noman declares

vivo V21 has a stylish slim design with an AG glass build and equipped with amazing cameras with OIS technology in both front and back camera. It comes with an AMOLED display and has a 4000mAh battery with 33W Flash Charge.

MASTECH, Reviews PK, and VideowaliSarkar maintain that V21’s camera is its central selling point. Its selfie camera is equipped with an OIS 44MP Super night selfie camera and even records 4K videos, which is truly a remarkable thing.  A few other brilliant features include Dual Selfie Spotlight, AI features in the front camera, making it one of the top choices in the smartphone world.

vivo V21 is not just a smartphone for tech enthusiasts, but also for lifestyle influencers and creators,

What Lifestyle influencers have to say about the V21?

In addition to that, all our popular lifestyle influencers such as Exploring Sisters, Fatima Kasuri, Tashfeen Arshad, Misha Khan, Maleeha Sultana, RozKay, and Haya Anees have one thing in common which that they all love the newly launched vivo V21 and how this smartphone assists them to #BeTheLightAtNight. These stars have shed light upon some impressive features like how the V21’s 44MP OIS Night Selfie System allows you to capture perfect selfies in a very convenient manner even at night time along with the 90Hz High Refresh Rate​ and E3 AMOLED Display. All of these attributes make the user experience silky-smooth and offers an immersive viewing experience. 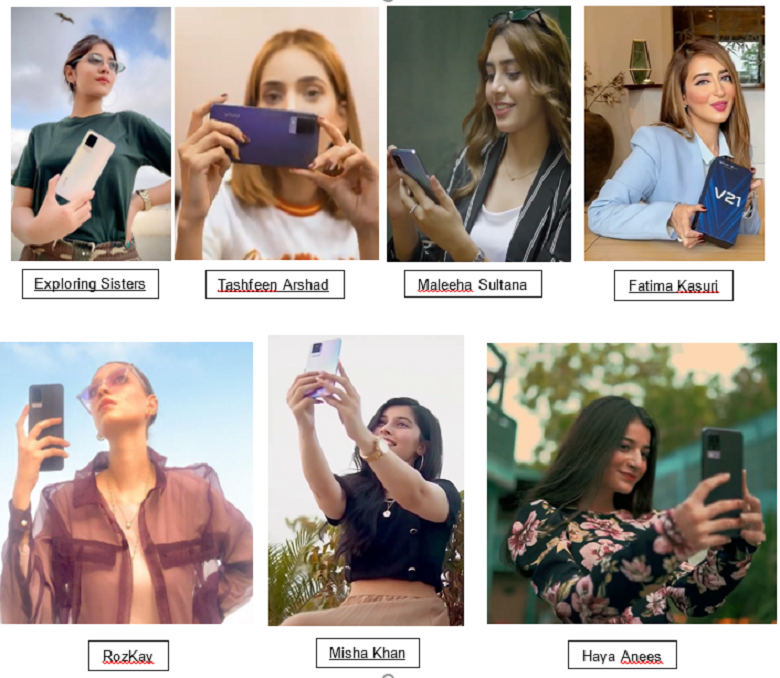 After all of the above discussion, one thing is quite clear that vivo V21 is the real game-changer and is a one-stop solution for all camera lovers. The V21 has managed to impress all the tech geeks and influencers with some of the most extravagant features along with its exclusive design and performance. The Night Selfie feature is a breakthrough technology, illustrating vivo’s commitment to redefining and transforming mobile photography. Thus, we would say that it’s the best choice for anyone who loves to capture every moment of the life and wants a smartphone that has excellent photography features just like the V21.