When we think about 5 billion downloaded software, that’s a landmark that seems impossible to achieve. Just Google apps such as YouTube, Play Store, Gmail, Maps, etc. pre-installed have been able to pass the mark so far. However, Facebook just broke the record, becoming the first non-Google app to cross 5 billion installs. For comparison, this landmark was reached earlier this year by Google Maps. 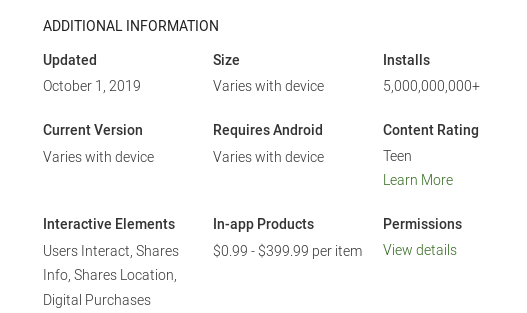 The fact that Facebook is the first non-Google device to reach this landmark is not surprising. Facebook has also made deals for years to pre-install the software on devices from Samsung, LG, Huawei (well, no longer), and others, in addition to being one of the most popular apps on smartphones.

The Google Play Store app’s additional information shows 5 billion downloads. Five years ago, it was the first non-Google application to reach 1 billion installs, but this is no surprise as it is now one of the most common applications. The fact that Facebook has reached the 5 billionth mark shows it’s more successful than many of Google’s own offer.

The fact that Facebook reached the 5 billionth mark indicates it’s more successful than many of Google’s own offerings such as Hangouts, Google Search, and Chrome. Facebook witnessed 9% boom in its daily users in the third quarter of 2018. Thanks to growth in markets like Indonesia, the Philippines and India.