Facebook is set to purchase Oculus VR, a virtual-reality-headset company best known for its Oculus Rift gaming device in $2 billion.

The deal includes $400 million in cash and $1.6 billion in Facebook stock, as well as an additional $300 million if Oculus meets certain performance targets. Oculus will continue to operate independently at its headquarters in Irvine, Calif. The deal is expected to close in the second quarter of 2014. Though the Rift has been pitched as a video-gaming device, Facebook plans to use its technology for communications, media and other forms of entertainment.

[blockquote cite=” Mark Zuckerberg, Facebook’s chief executive”] Virtual reality has the potential to be the next great computing evolution, following the transition from desktop computers to mobile devices. Oculus has the potential to be the most social platform ever. Imagine sharing not just moments with your friends online, but entire experiences and adventures.[/blockquote]

The Oculus Rift made its public debut at the 2012 Electronic Entertainment Expo, the video-game industry’s largest trade show. That summer the company launched a wildly successful Kickstarter campaign in which it eclipsed its $250,000 funding goal nearly 10 times over. Interest in the device has risen steadily since then, with the company raising more than $90 million in venture funding over the past two years. As many as 75,000 people have ordered developer kits in order to test the device and begin making software for it. And owners of the device can already use an Oculus Rift to play PC games, enter the world of Game of Thrones or even visit a supermarket. 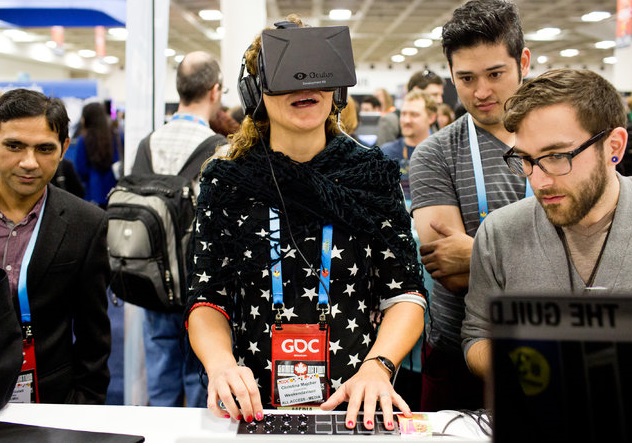 The acquisition comes just weeks after Facebook announced it would purchase the messaging service WhatsApp for $19 billion. Zuckerberg noted that he didn’t expect Facebook’s buying spree to continue, but that the company would open its wallet for companies that it thinks offer a unique value opportunity.

The huge purchase shows that every major tech player is making a big bet on wearable devices. Google is continuing to develop its Google Glass hardware and just announced a version of its Android operating system tailored for smart watches. Samsung already has a line of smart watches. With Oculus, Facebook is making a remarkably bold bet that people in the future will want to be fully immersed in technology.