Can you believe Facebook is on TikTok? But what is the gain for Facebook in this? Taking a look at the competition? Do they want to DM Charli? Are they looking for beta testers? Purchasing advertisements? We’ll find out soon enough, as the platform has established its TikTok account. They have already gathered 15.1K followers despite never having posted any accessible videos as of this writing. TikTok has authenticated the profile, and Facebook has also confirmed its legitimacy.

Matt Navarra, a social media analyst, discovered Facebook’s TikTok (that sounds incorrect) a few days ago. A blue checkmark had appeared on the account, suggesting that it had been validated. However, it lacks content and has an unusual bio – “We believe that people may accomplish more when they work together than when they work solo.” Why the comma? It is making us wonder if this was Facebook’s account. Furthermore, the account’s bio directs users to the Facebook application on Google Play, rather than its website or an official communication channel. 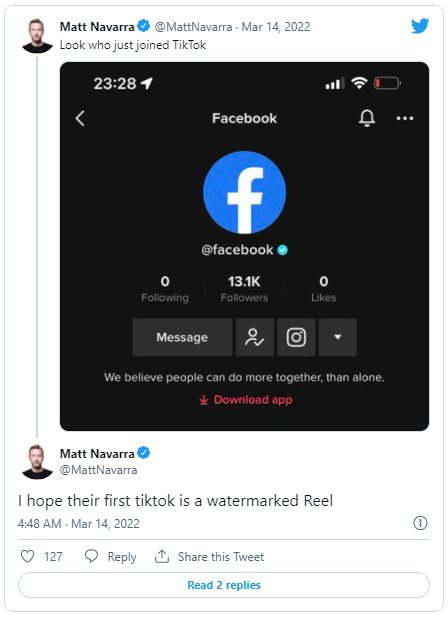 Here is the Twist: Facebook/Meta confirmed that their account on TikTok is real. A Meta spokeswoman said, “Brands use a range of channels, including several of our social media sites. It is to connect and engage with the people who use their services every day.” “We have the same goal in mind when it comes to developing a brand image and developing community on networks like TikTok or others.”

Also read: Galaxy Z Flip4 is Coming as Samsung has Ordered Display Panels for it