A combination of free and paid information will be delivered in the Bulletin. Some articles will be accessible to everyone, whereas some will be under the paid subscription layer, and only paid members will get access to additional features such as exclusive Facebook groups or special badges.

Recommended: Facebook achieves its market cap value of above $1 Trillion

Facebook will also pay authors for their contributions to add content to Bulletin like newsletter upstart Substack. Zuckerberg also confirmed that Facebook will not cut writer incomes and will allow them to take their contents and subscriber lists to different websites as well.

In contrast to Facebook’s news related attempts in the past, it is important to highlight that the Bulletin section will outside the main Facebook application. The newsletter platform has its own website and brand, although it will utilize the distribution tools of Facebook. The newsletters will be linked to the Facebook pages of the authors and the contents will be available for readers in the news section of the Facebook app. Writers can also “complement their writing” with podcasts and audio rooms, added Zuckerberg. 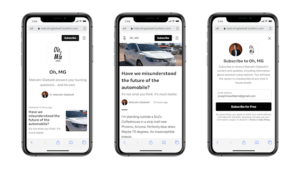 Initially, the bulletin writers list includes famous authors like Malcom Gladwell, a Canadian journalist, and Adam Grant, a bestselling American author and some are from TV networks, such as Jessica Yellin, former White House reporter at CNN, and Erin Andrews, former ESPN correspondent. It is still unknown when Facebook will provide an opportunity to handpicked writers on this new platform. Zuckerberg stated that in the next weeks more writers would come on board. Furthermore, the company will completely avoid the “political” authors, which may create issues for the rival Substack.