[blockquote cite=”Ezra Gottheil, an analyst with Technology Business Research”] This makes sense for Facebook, They haven’t done anything like this before, but it’s a natural fit for them. People use their network already to find jobs. Facebook has a long way to go before it begins to impinge on that space
[/blockquote]

New app starts with 1.7 million job listings, ranging from engineering to medicine and IT. The app has job listings from other online job boards like BranchOut, DirectEmployers Association, Work4Labs, Jobvite and Monster.com. Right now, users can browse through more than 1.7 million openings. A ticker at the top of the app shows the exact number of available jobs. 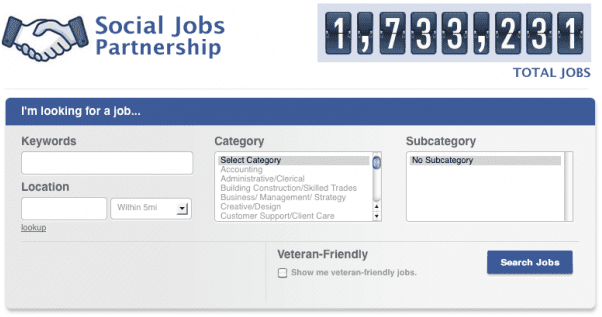 Facebook’s press release cited the flagging economy as the inspiration for the app
[blockquote cite=”Facebook”] When it comes to economic growth, few issues are more important than matching qualified candidates with great jobs. In that spirit, we know that the power of social media — the connections between friends, family and community — can have an outsized impact on finding jobs
[/blockquote]

Facebook has a very powerful ability to help in the recruiting field: Most of the employers are already using Facebook in their hiring process. According to Social Jobs Partnership research “Social network will become a more important part of hiring in the future”